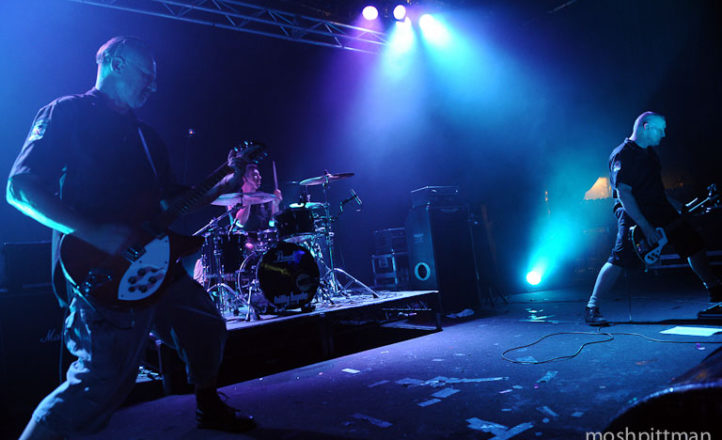 The Mark of Cain/Andrew Pittman

Six years. The last time The Mark of Cain played live John Howard was still Prime Minister and MySpace was still the cutting edge of social media. Tonight on a balmy March evening in Sydney, the Adelaide power trio were bringing their long-awaited current tour to its end at the Metro. Traditionally greeted with swarming crowds, there was almost nobody around early in the evening, and opening act Zeahorse churned through a fairly short set of Sonic Youth/Fugazi-inspired avant garde noisemongering to a virtually empty room. By the end of the next band’s set, however, the trickle had become a flood. With their own brand of noise rock dissonance recalling the classic 90s stylings of The Jesus Lizard and Steve Albini, Blacklevel Embassy seemed to leave a solid impression on the crowd. In the end though, there was only one band everyone had come to see tonight. A six year wait was almost over.

After little more than a detached wave from John Scott as he picked up his guitar, The Mark of Cain opened fire with “First Time” and the crowd on the floor in front of stage became a pit of moving bodies with every voice in the room shouting in unison. With that, one of Australia’s most notoriously intense and unrelenting live bands announced their return to Sydney. “Second Hander” was spat forth next and it was already perfectly clear that The Mark of Cain’s time away from live performance had no effect on them at all. As The Mark of Cain was then, The Mark of Cain is now: uncompromising, militaristic, detached. For a band to whom drummer changes were habitual for the first twenty years, the replacement of John Stanier for these shows with Life PIlot’s Eli Green was unnoticable. Onstage they present the same image as they do on plastic: unadorned, stark, distant, the Scott brothers’ matching uniforms uniting them, together alone.  They barely acknowledge their crowd at all, showing the same isolated front their music presents. No one cares. That’s what’s expected from The Mark of Cain. It’s what they’ve always been about.

“Tell Me” lets chaos reign, one of the best riffs ever. Newer songs elicit the same response as older ones as “The Argument” and “Avenger” mesh seamlessly into the set; back to back, “The Contender” and “Interloper” almost bring the house down. It’s a long, gruelling set – 17 songs with only the glorious and poignant “LMA” breaking the flow of uncompromising punishment doled out by their rigorously regimented riff arsenal, and ending with “Point Man” that delivers more bluntly than any other tune the entire message of The Mark of Cain: You are Alone. Alone, but united, Sydney welcomed them back. These were lessons we had long missed being taught.