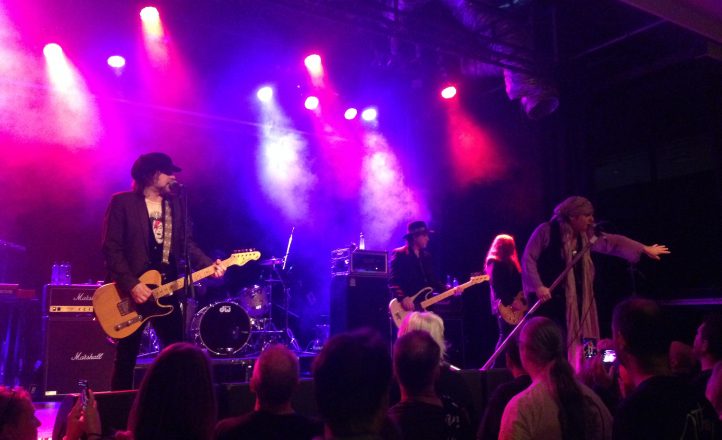 The Quireboys recently enjoyed their 35th anniversary as a band and also released a cracker of an album, the aptly titled Amazing Disgrace. While their profile overseas in places such as Europe is very high and manages to attract large crowds, in Australia they are not that well known. Touring here for the first time, they made the long trek and set about making a decent fist of it with shows in four capital cities. The core line up knows they have some good songs and delving into some gems from their rock and roll infused back catalogue, The Quireboys tour looked set to do well.

Admittedly, the crowds in attendance were not large but they were certainly loyal with many a punter singing along to better known songs and also enjoying the newer, potentially unfamiliar tracks. Their swaggering, seventies styled rock attitude, which saw them share stages with some huge names over the years was still intact, playing with conviction and grit.

To start the show tonight, Melbourne band Palace of the King flew the blues tinged hard rock flag high and with a serious groove that bordered into funk at times. Fronted by the laconic, hat wearing co-guitarist and vocalist Tim Henwood, the band’s rhythm section was locked into the walking riffs from the start. Co-guitarist and keyboardist Sean Johnston added brighter sonic flavours with his instrumentation choices as the band road-tested some new material from their upcoming album.

Older tracks One of These Days and Take Your Medicine sat nicely alongside new song Get Right With Your Maker. Henwood’s vocal timbre suits the mix of Gibson and Telecaster guitars, pushing through the mix regardless of playing a powering shuffle with driving attack and backing vocals or a slower, soulful piece with open slide guitar and the odd bit of harmonica.

No Chance In Hell included a snippet of Nugent’s Stranglehold plus an extended guitar solo chock full of hard rock and blues guitar techniques during which Henwood wandered out into the audience. On returning for their final song of the set, a fuzz pedal styled solo ensued with the guitar behind the head backed by high energy, almost jazzy chords that had a certain Hendrix feel to it. Palace of the King were certainly at the right gig and milked it well.

As house lights lowered and the blue and red stage lights cranked up, The Quireboys casually walked on to the stage positions and in the case of clearly ‘well-refreshed’ front man Spike, ambled on, encouraging the audience to raise their drinks. The bandanna-and-scarf sporting, bohemian styled singer welcomed those present as the band dived into the rock and roll shuffle of I Love This Dirty Town from the solid 2008 album, Homewreckers & Heartbreakers.

Keith Weir added piano, honky tonk bounce to Misled from the classic 1990 debut album, A Bit of What You Fancy, with long serving guitarist Guy Griffin digging into his bright sounding Telecaster guitar with some B-Bender styled licks. There She Goes Again was done very well with the audience singing along as tasty slide guitar licks got an airing.

As the show progressed, co-guitarist Paul Guerin locked in with the rhythm section, with the occasional guitar solo but it was mainly over to Griffin for the bulk of the soloing duties. Spike spun around with his mic stand, grooving with the music and adding wide hand gestures as he interacted with the fans.

A good chunk of the set featured songs from A Bit of What You Fancy but an early highlight was the swaggering funk rock of latest album track, Seven Deadly Sins saw all elements of the band working as a tight unit but with enough sense of song space and pace to milk the strong chorus. Similarly, new album track Sinner Serenade worked well and had a real early Stones feel with added slide guitar.

Spike’s gravelly voice sat perfectly in the mix for slower tracks such as Mona Lisa Smiled, which also included a restrained but apt guitar solo from Guerin. Hello was a change of pace that blossomed with raw guitar chords with keyboard parts as the audience sang along.

The title track from This is Rock’n’Roll offered up revving up slide parts, ringing guitar chords and hefty attitude from Spike, geeing up the audience with wide handclaps. A repetitive tune maybe, but effective and done with the attack of a band that had clearly lived it and survived it.

Man On The Loose was introduced as ‘a song they haven’t played for ages, apart from last night,’ with a laidback, cheeky smirk. Piano runs and drum fills bolstered the up-tempo, vocal driven track and the outro guitar solo was more loose and expressive. Dedicating Hey You to the people of Haltwhistle, the band soon showed off more of their blues rock influenced edge melded with their strong sense for a catchy chorus.

Amazing Disgrace track Original Black Eyed Son continued the rock swagger vibe with their well-honed push and pull song rhythms. Strong backing vocals, high notes on the piano and a guitar solo with great tone was the icing on the cake.  Ballad Sweet Mary Ann started out as quiet country ditty with guitar, piano and vocals but soon had the entire band in full swing by the second chorus, geeing up the already enthused audience into a raucous sing-along. It ended on some snazzy country guitar licks and a few well-placed yee-haws from Spike.

7 O’Clock was kicked off with almost evangelical Gospel fervour as Spike took to the harmonica followed by piano improvisation bursts from Weir, over the powering guitar chords. The audience lapped it up and the song demonstrated The Quireboys’ mastery of the blues turnaround to get back to a jumping chorus. It was a fun, upbeat way to end the main set and added to the atmosphere.

Returning for an encore with more refreshments in hand, the slow paced piano ballad I Don’t Love You Anymore was well played. Guerin took the first, more subtle guitar solo whilst Griffin took to the outro solo with country styled blues guitar licks, leaning and crouching into his guitar, reaching for high notes that chimed out with the piano and vocals. Of course, to end proceedings, the silliness of Sex Party was pounded out with back and forth twelve bar blues, a loud chorus and with Spike inviting Palace of the King’s Henwood on stage to sing along.

Die-hard fans might argue there’s plenty more material from other albums they could play but as a first tour here, they covered material that most fans would want to hear live. Raw attitude and simple fun was the order of the day. The Quireboys did not disappoint, delivering a rip-roaring ride with their eighty minute set.