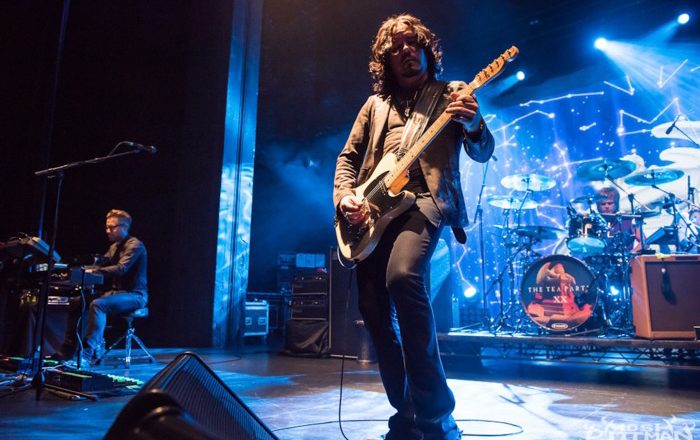 Twenty years ago The Tea Party wove a spell over Australia with their second album that has lingered right through until the present, if the crowd at the Enmore Theatre was anything to go by. On their third tour here since reuniting in 2011, the Canadian trio have lost none of their attraction and anticipation was thick in the air with the promise of hearing them perform the breakthrough The Edges of Twilight album in full.

The program seemed to kick off a little late, but then Jeff Martin appeared with an acoustic guitar and led the way into ‘Fire in the Head’. It was only a tease though, as the band quickly switched into electric, hard rocking mode, ripping through the track that brought them into so many people’s lives. The strings and orchestration seemed a little loud but by the end of the song the sound had settled down for the cascading riff that leads into ‘The Bazaar’, a firm band favourite that has the entire crowd raising their voices into the chorus. Martin, a deeply spiritual individual, takes a long solemn moment to address his thoughts about the tragedy in Paris earlier today (Sydney time) before dedicating the contemplative ‘Correspondences’ to the people of France, his delivery even more passionate than usual.

Instrumental piece ‘The Badger’ brings out the folk instrumentation as Martin cranks up the song with a hurdy-gurdy and Stuart Chatwood provides the accompaniment on harmonium, which he returned to several times throughout the night. It wasn’t going to be enough for The Tea Party to simply present this album. From Martin opening the set with an acoustic guitar to the way ‘Sister Awake’ winds through ‘Paint it Black’ and back, to the three-part percussion moments and extended guitar solos, this was a reinterpretation and a reaffirmation of just how good an album The Edges of Twilight is with its Eastern and Moroccan motifs and lyrics of occult romance and mysticism. “You’re doing voodoo!” Martin cried to the crowd as he led them into a chant and there did indeed seem to be some magic in the air. Jeff Martin is the focal point of The Tea Party but he couldn’t be without his equally talented bandmates – Chatwood moves constantly from bass to various keyboards, harmonium and even the mandolin (for ‘Shadows on the Mountainside’) and Jeff Burrows is forever on the money with a sweeping array of beats of all flavours.

With the album done, the band retired for an intermission, returning with the Seven Circles song Writing’s on the Wall providing some rocking out ahead of the more recent epic ‘The Ocean at the End’ with Martin’s marathon guitar solo and visuals of churning sea waves rolling behind Burrows. In ‘Save Me’ of course Martin channels his inner Jimmy Page, battering his guitar with a violin bow and then taking the homage further by steering the band through some of ‘Kashmir’ and back to end the set before ‘Temptation’ as the encore raises the roof. For a Tea Party fan, this was a performance amongst their very best but even a more casual rock fan would have come away with a feeling they had just witnessed something very special. This is one of those bands that always leaves that impression.