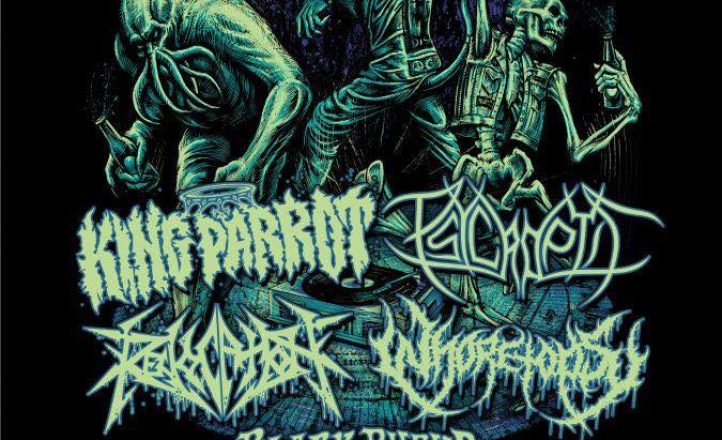 It’s been nigh on twenty years since I last set foot inside the Cambridge and given this was  Tuesday night I thought it quite possible that I’d driven three hours to be the only person here. As it was though, upwards of 200 more punters had come along to enjoy an evening of quality, high energy extreme metal.

Local lads Staunch lived up to their name, warming up the crowd with a set of furious and muscular hardcore. There wasn’t much in the way of subtleties from these guys, just a barrage of heavy riffs and roaring vocals that set the scene for what was to follow. Sydney trio Black Rheno was next to bring the action. These guys are a whirlwind of energy fronted by a bald giant who throws himself around the stage, turns an accidental slip into a series of push-ups and then continues capering about while his bandmates tear out a solid onslaught of sludge-ridden hardcore groove informed by everything from Crowbar to Clutch and Goatsnake. Whoretopsy came out next, a bludgeoning slab of blastcore that brooks no argument with anything less. Their set is a relentless wall of crushing riffs and windmilled hair that is pure brutality and little else, so it becomes something of a blur after more than a song or two.

Then tourists Revocation stepped up to show the Cambridge a thing or two about death metal. The speed and intensity of their performance was astonishing as they ripped through a complex array of riffs and grooves. The lack of lead guitar employed by most of the rest of the bands was more than made up for by a truly phenomenal performance from Dave Davison as he shredded the life out of his instrument with a series of extended solos that set the room ablaze; drummer Ash Pearson was remarkable, nailing down Revocation’s intricate arrangements with apparently effortless ease. This was a band to behold.

Another band to behold is Psycroptic. I’ve seen this band countless times over almost twenty years and they have never put a foot wrong. With all the band in place as the clean intro to ‘Cold’ played through the PA, Pep peeled off his shirt, stepped up to the mic, and it was on. Time constraints forced all the bands into short sets tonight but Psycroptic made every moment count, Joe Haley almost casually firing off a constant stream of complex fretboard-sweeping riffs over the foundation of brother Dave’s infallible clock-stopping drumming. Reaching as far back as Scepter of the Ancients’ ‘Lacertine Forest’, tonight’s set was another display of faultless technical death metal mastery.

King Parrot hadn’t even started yet and Slatts was already cajoling the crowd into a singalong as ‘Am I Ever Gonna See You Face Again’ pumped through the PA; before it could finish, though, it was time for business as, typical for the night (but de rigueur for this band) Youngy took off his shirt to announce the start of the set.

Some bands incite the crowd. King Parrot beset them, unleashing a tornado of energy and volume that forces the audience to get into it or get out of the way. Youngy and Slatts are the main antagonists, constantly stirring the action, the vocalist getting down into the pit, spraying and/or spitting water around the room and exposing his bare arse. This is more than a musical set. It’s an assault, a bunch of guys going totally berzerk in a form of adrenalised, barely controlled chaos that brings the night to a close in an exhausting display of pure sonic violence. I was totally sleep-deprived for the whole of the next day, but this was worth it.