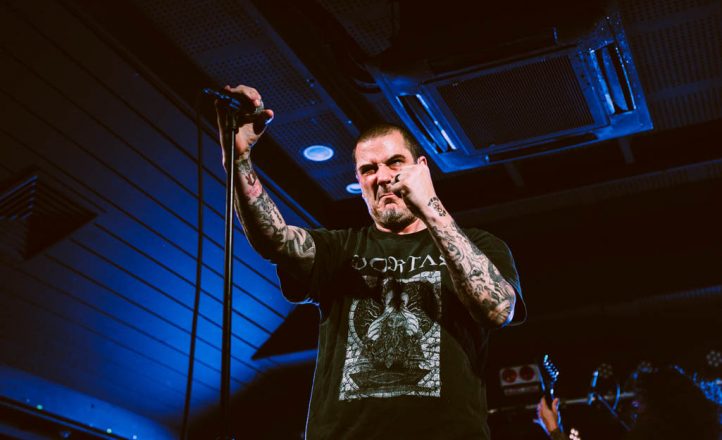 Thrash. Blast. Grind. Words to echo no feelings of warmth, celebration, compassion or unity whatsoever. Rather, an imminent warning of rage and violence to weed out wolves of the pack from the silent wallflowers. Though firmly delivering it’s promise of adrenaline and danger, The Factory Theatre’s Sydney leg of the national Thrash Blast Grind Tour on Saturday March 30th actually retained a strong element of community, togetherness and cultural harmony in the face of such aural abrasiveness.

The chief instigator of atmosphere and main drawcard of the night: Housecore Records’ own Philip H. Anselmo, a man self-described as ‘ridiculous, blind, crippled and crazy’, whose impact on the face of modern metal is never underestimated through his time served with ten radical acts including being Down, Superjoint Ritual, Scour, Philip H. Anselmo and the Illegals, and of course, the mighty Pantera, whose apex position at the top of the 90s metal heap still casts an almighty shadow above the 53 year old frontman. So for a member of a band that once weakened and intimidated the sound of radio rock darlings Metallica in their Load, ReLoad era through lending his terrifying vocals to albums such as Pantera’s The Great Southern Trendkill, it was humbling and endearing to see Phil back on the metropolitan theatre circuit instead of the immediately sold-out international arena route where Metallica still find themselves. This is a man who proves himself even bigger and more unnerving in person as in countless YouTube clips, and being close to the front of the crowd at this Marrickville show seemed to me like the only way to do justice to such a magnetic and steadfast performer, one who shrinks the stage around him with every step.

The international ensemble of supporting musicians were, justifiably, equally as eager to imprint themselves on collective memory as The Illegals and Phil, and it showed. Though railway track work, long queues, and the relative industrial isolation of The Factory sadly made me miss Sydney openers Potion and their dismal occult doom filth, Osaka, Japan’s Palm were intent on fulfilling their international travel goals by delivering a memorable, rapid and gleefully chaotic set of blackened, tortured hardcore, along with the four-piece’s shirtless Aussie bassist, Will de Monchaux and his incredibly long, tentacled dreadlocks.

While Will was faithfully fed beer during the set at the side of the stage by his significant other, frontman Toshihiko Takahashi found it impossible to stand still for more than five seconds at a time by murderously prowling the stage to produce throat-shredding vocals and head butt his microphone, Anselmo-style, calling for a total of five circle-pits throughout Palm’s set. In further tribute to the Southern-styled heritage of our headliners, certain riffs seemed to linger into swampy sludge passages before amps were left droning to be ploughed away at by more D-beat thrash. While these wayward sons of the Rising Sun tried their utmost to prove themselves as memorable, an equally hardcore crowd ensured that no one was safe in the pit as the sting of catharsis hung palpable in the air.

A more familiar bogan sensibility was next brought to the stage as Melbourne’s mad bastards of grindcore pub mosh, the extremely flightless King Parrot, beckoned insanity in the pit to deliver such devastatingly flippant numbers as ‘Dead Set’, ‘Piss Wreck’, and recent crowd favourite ‘Ten Pounds Of Shit In A Five Pound Bag’. Though earning a status of resident mayhem-mongers at beer-drenched urban Victorian establishments like The Tote Hotel, the immediacy of King Parrot’s blunt force trauma tracks were not deterred by a higher stage, longer room or larger crowd, as more volatile fans allowed more volume and encouragement in numbers. The group were known to have played to the masses at Soundwave 2015 after all, delivering a much-needed nuts kick of Aussie hostility. Not that King Parrot cared about the venue’s size, as all members were quite nonchalant, especially chief provocateur/bassist, Wayne ‘Slatts’ Slattery, who frequently held court at the microphone to mock Sydney, joke about his declining health, and fire off general irrelevant jest to get a rise out of the crowd.

Notoriously unhinged vocalist Matt ‘Youngy’ Young proudly wore a Palm singlet as he tore up the stage to further instil a sense of scene camaraderie, before coming back in a Potion singlet as he provided backing vocals to The Illegal’s faithful rendition of Pantera’s ‘Walk’. Though his signature bald, shirtless frontman appearance did not manifest, Youngy still delivered a routinely vicious performance to a riotous crowd he kept wetting with fistfuls of water bottles. Thirsty work.

Both King Parrot’s Todd Hansen and The Illegals’ Joey Gonzalez displayed steadfast skill as unwavering, technical drummers of incredible endurance to maintain the proper amount of thrashing and blasting throughout their sets, with their respective six-string guitarists Ari White, Andrew ‘Squiz’ Livingstone-Squires, Mike DeLeon and Stephen Taylor seeming to spend a majority of time staring at the crowd and head banging then observing their fret-boards. Though almost equally revered for his skill as a comedian, Slatts held it down well on bass and Phil Anselmo’s guitarist of the low-end, Cattle Decapitation’s Walter Howard easily displayed the superb ability and energy required for performing the technical-death metal of his former band at such an advanced level of ability.

The first we see of Phil is at the side of the stage for towards the end of King Parrot’s set, before the five-piece close on 2012’s ‘Shit On The Liver’. Arms crossed, gazing with speculation at the performance, we get an impression of his relationship as a friend and fierce fellow-fan. To be present in that raucous venue as the main subject of attention, while still being alive at all, playing his own music beginning as notebook scribbles on a high foreign stage with his beloved friends, Phil radiates a genuine sense of gratitude and joy through the whole show, despite still being one of the world’s most intimidating frontmen.

When letting the crowd’s anticipation climax all over the floor of The Factory upon their arrival to the stage, Philip H. Anselmo and the Illegals , cut down their greeting time to plough into ‘Little Fucking Heroes’ from last year’s Choosing Mental Illness As A Virtue LP, pummelling, bleak and utterly devoid of warmth. Through being prized for the vocal versatility to lead to inclusion in projects mirroring doom and black metal amongst the grind core, hard core elements of The Illegals, Phil Anselmo’s cigarette and weed weathered, booze-infused lungs easily modify from piercing high shrieks to cavernous throaty lows throughout the set, with the authenticity of a true metal icon. Representing cult Australian death metal act Portal in his choice of t-shirt for the night, one was often totally transfixed on Anselmo for both parts of The Illegals set’, the first half being totally comprised of original material, and the second, Pantera favourites. While bearing all the subtlety and friendliness of a medieval executioner while deep in the vocal zone, Anselmo also took time to show compassion to his fans between songs to offer much appreciation for the crowd, celebrate all support acts on the night, and offer insightful backstory on certain tracks such as 2013’s ‘Bedridden’ and his overall musical approach with The Illegals, namely, “disgusting, miserable, grim tracks wrapped in a great big ugly condom”. “I needed to let these words out”, Anselmo revealed while introducing ‘Bedridden’, whilst saying that the depression of the mindset he found himself in while writing that track provided the crucial inspiration he needed for creatively uplifting himself to bigger and better things. His motivation to dedicate half of The Illegal’s set to songs of his most famous former band stemmed from the untimely death of Vinnie Paul last year, while the spirit of Dimebag Darrell is still as present as it ever was. Unfortunately, I don’t think the audience reciprocated the appropriate respect Anselmo showed us when revealing such information, instead being content to carry on vocally and loudly in the face of onstage reflection, but Phil was fortunately, undeterred. After all, it’s not often that you’ll find such an imposing metal vocalist talking so calmly about his creative process during his set, but at least his musicians got a chance to catch their breath. You don’t find James Hetfield doing that…

After Anselmo posed a question of age to determine who in the room had actually been alive to see Pantera in their heyday, the opening riff of ‘Mouth For War’ caused a seismic physical shift in the crowd mass at the front of the stage as we jostled for a place in the densely packed pit. The freeing levels of insanity were only heightened further as The Illegals tore through such charting classics as ‘I’m Broken’, ‘Becoming’, and a riotous, freak family-infused ‘Walk’ with members of King Parrot, Palm and Potion providing chorus vocals. A medley of ‘Fucking Hostile’ segueing into the breakdown of ‘Domination’ and the final section of ‘Hollow’, from Cowboys From Hell and A Vulgar Display Of Power, respectively, squeezed any hope of breath out of our lungs as we leaped against a wall of bodies on a grimy, sticky floor. Imposing stage presence aside, Philip H. Anselmo’s most memorable quality was definitely his authentic and highly vocalised admiration and support for the current state of the scene and the love of his band, standing to playfully joke alongside such Illegals members as guitarist Mike DeLeon, who stood to shred on a black flying-V in a Beavis & Butthead t-shirt with marijuana leaf-imprinted shorts. Though being a way of life for some, the genre of metal can always be just a bit of fun too. At the end of the day, we were left to trickle out of The Factory Theatre to mingle with those present at the esoteric Viking N3 rap show leaving The Factory Floor past the trusty Island Boys food truck, who had provided the gig fuel for the chilly t-shirt crowd on this night in Australia’s city of rock ’n’ roll. Anselmo’s touring gang then left to destroy The Cambridge in Newcastle and come back to Frankie’s Pizza to perform a free show on April 1 before more tour dates in Melbourne and Hobart, while all punters present were left to ponder the state of their well-earned hearing loss.