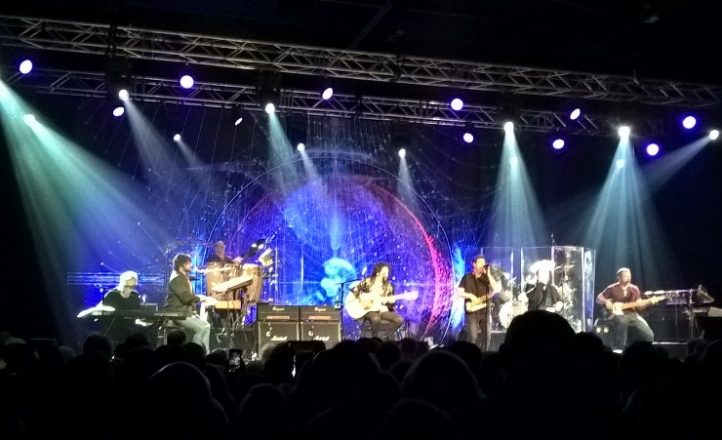 Toto arose from the late seventies session music scene. Their huge success was not without substantial turmoil but the band members can be found on some of biggest selling albums of all time. Their enduring legacy has been brought into a new light given a comparatively recent, unexpected yet justifiable reunion. Having released remastered classic songs with Greatest Hits: 40 Trips Around the Sun and including three new tracks has generated fan base interest but it was the playful payback cover of Weezer’s dark hit ‘Hash Pipe’ after Weezer covered Toto’s mega-hits ‘Rosanna’ and ‘Africa’ that has introduced the band to an entire new demographic.

Finally back in Australia since touring here over a decade ago after which the band temporarily disbanded, it was a packed audience of old and new fans at the Hordern, eager to see the band play a stretched out two hour set as opposed to the fifty minute festival sets in most other states. The audience was rewarded with a musically proficient and sonically perfect performance that saw Toto with more energy than when they first toured Australia in 1992 on the back of the brilliant Kingdom of Desire release of the day.

Three of the four core members were present at this tour since keyboardist and vocalist David Paich is currently ill. In his place, former Prince band member Dominique ‘Xavier’ Taplin was situated at his keyboard station. At stage left, keyboardist Steve Porcaro, the last of the legendary Porcaro brothers, was similarly set up with his keyboards. Central to the band and the stage, leather jacket wearing guitarist Steve Lukather was near a twin amplifier head and slanted cabinets set up. Ever amiable, Lukather provided some stage banter with a hint of Jimi Hendrix’ style to his quips and anecdotes. Sharing the front stage area was veteran vocalist Joseph Williams in wide blue scarf, black coat, beret and sunglasses.

New song ‘Alone’ opened the show and the already loud applause escalated when Lukather smoothly edged into his first guitar solo for the evening. His tone and playing was of course superb. Second track saw ‘Hold the Line’ getting an early set list place and as the piano and guitar riff enticed the audience, a big chorus sing-along ensued.

The very eighties pop sounding ‘Lovers in the Night’ from the huge Toto IV album followed before new track ‘Spanish Sea’ brought back recognisable percussion, piano and vocal harmony driven sounds of the classic line up. Tambu track ‘I Will Remember’ continued in the percussive and vocal led songs. Guitar based rock kicked in again for ‘English Eyes’ with a tasty, fast and slinky guitar solo from Lukather.

The show highlight for musos was probably the instrumental ‘Jake to the Bone’ from Kingdom of Desire with the band showing off their fusion chops. At one point, Shem von Schroeck and Lukather stood side by side grinning in appreciation as Taplin soloed with skill. Lukather owned the track though with his solo part chock full of sliding chromatics as he wandered across the stage and back before the band returned to the main song theme with deftly executed time signature and riff variations simply because they can.

Ballads are something Toto do very well so the Steve Porcaro penned ‘Lea’ from Fahrenheit was next and provided a change of pace before the party song from 1982, ‘Rosanna’, was introduced by those key drum, piano and muted guitar octave parts whilst a purple lit stage was filmed by half the audience. Handclaps, chorus sing-alongs and note perfect guitar solos made this an overall show highlight. Aside from the keyboard parts, Lukather’s guitar solos on the song remain quintessential concise guitar pieces of the day with the outro jam part extended this evening before Lukather’s improvised solo resolved to those super wide vibrato parts and slippery jazzy scalar guitar lines rang out across the venue.

Changing into semi-acoustic mode, a medley of sorts followed with anecdotal introductions including Lukather talking about doing vocals on ‘Georgy Porgy’ and Porcaro explaining the inspiration behind ‘Human Nature’, a version of which ended up on Michael Jackson’s mega selling Thriller. The medley was finished with ‘Stop Loving You’ from The Seventh One which allowed Williams to relate his inclusion into Toto’s hit songs legacy.

A couple more tracks from Toto IV closed out the main set. Firstly, the melodic piano pop of ‘Make Believe’ and then secondly, the huge percussion and keyboards based hit ‘Africa’ after some brief teasing from Lukather. During ‘Africa’, the stage was green backlit with yellow and red pots flashing colour down on the stage as the audience sang along loudly to the chorus. Castro indulged in a percussive solo with bass drum backing from Forrest which then led to an extended call and response to the audience from both Castro and Williams as Lukather added some subtle, clean guitar lines.

In light of Weezer covering a couple of Toto classics, Toto covering Weezer’s ‘Hash Pipe’ was an intriguing choice to end their show with a one song encore. Somehow it actually worked and after
two hours of diverse music from a band with incredible individual and collective musicianship, a quick hammering song with a repetitive ascending riff was a welcome ‘wild card’ of a song. A few solos were interspersed for good measure but it was still unique territory for Toto.

Toto can master anything in the music world and the encore proved that point unquestionably. Toto were remarkable this evening and quite simply, they remain virtually without peer both in the studio and in the live setting. A sensational musical start to the year.