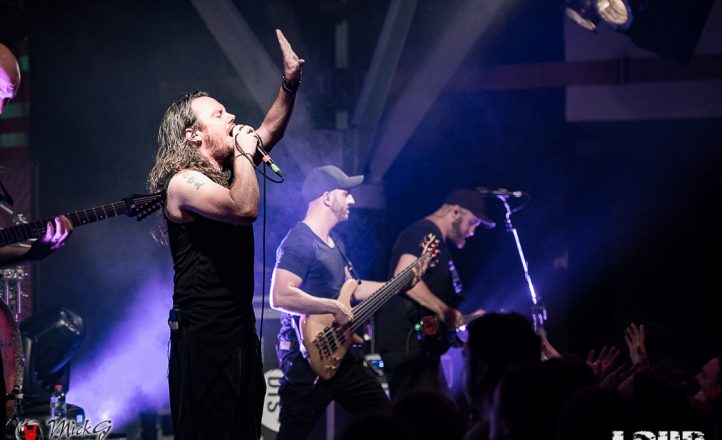 Aussie fusion metallers Twelve Foot Ninja tore up the Cambridge Hotel on this Saturday night with their unique blend of alternative metal and djent. Supported by local Newcastle post-metal band Majora, the night was something to experience. Last year Twelve Foot Ninja released their monster record Outlier which made it to #6 on the chartnand really highlighted their Patton-esque fusion metal style.

First up, I’d just like to talk about how great a venue the Cambridge is. It’s almost like the Tardis: it doesn’t appear to be all that big but once inside, you find yourself in an intimate yet well sized venue with plenty of room for punters.

The openers, local post metal group Majora, where a nice surprise and little discovery to me. A great bunch of guys who played instrumental atmospheric metal in the vein of Isis, Pelican and Palms that is totally up my alley. Majora gave a sustained yet energetic performance, and impressed me not only with their ability to play guitar while barefoot for an extended period of time. It was the first show of the year and their first in a long time, as they have been busy working on their debut album, Aphonic, to be released later this year. This maybe the case, but they obviously haven’t missed a single beat. Everyone was right there in the moment giving a focused and melodic performance. The band previously dropped their EP Iridescent in 2015, and I implore everyone to give a listen.

Then on to the main event. From the moment these Melbourne boys stepped on the stage it was utter chaos on the floor as the crowd erupted. Twelve Foot Ninja have a presence that just oozes charisma. One of the major worries I have before any show is about the vocals. Often I’m disappointed by live vocals when they are either not as good as on the record or not powerful enough and get lost by the rest of the band. I am glad to say however that Twelve Foot Ninja does not have this problem. Kin Etik’s strong voice could be heard over the band the entire night, and they were as good, if not better than, on record. Displaying a solid amount of endurance, Twelve Foot Ninja played an long, energetic set that went on until the early hours of the morning, consisting of an assortment of songs from their career so far.

They did a great job working the crowd and making their humble audience members feel part of the performance. Twelve Foot know how to put on a show, with lead guitarist Steve MacKay doing his best Angus Young floor spin in one of the solos. The Cambridge’s crew should also be commended for fantastic light and sound.

After coming on for a double encore of “Sick”, the namesake of their tour, and “One Hand Killing”, the band gave a surprise performance of “Happy Birthday” to an audience member named Gillian, before thanking everybody for a great night.

If I had to sum up the show in one word, that word would be “fun” – fun that was only heightened by a great venue and friendly people in the crowd. Make a note to yourself, if you haven’t seen Twelve Foot Ninja yet, you should see about catching them next time.