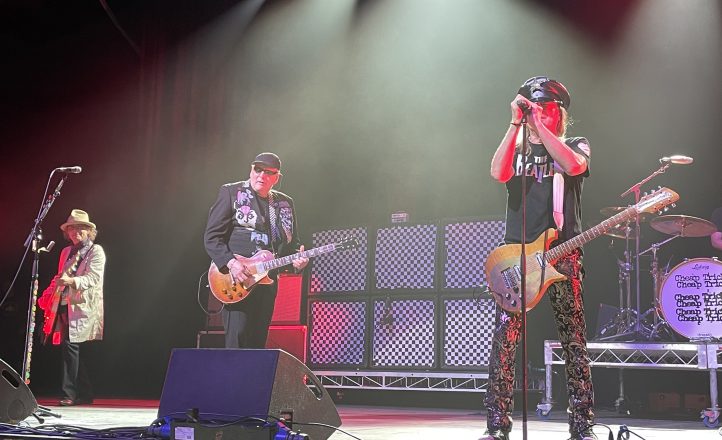 It was as if an ancient curse had fallen upon this touring festival. First announced sometime in 2019 with the 90s-nostalgia heavy line-up of Stone Temple Pilots, Bush and Live with local supports from Rose Tattoo and Electric Mary, COVID stepped in even as we ran an interview with Robert DeLeo of STP and postponed it for a year. In the intervening period, US rock royalty Cheap Trick came in to replace Live and the whole shebang got pushed back another twelve months. While other tours disappeared altogether, somehow Under the Southern Skies managed to finally open in Australia, with the added bonus of San Francisco rock trio Black Rebel Motorcycle Club coming aboard. If the organisers and entourage believed the curse had finally been lifted, there was more to come, but in the end it wasn’t too bad.

A last minute shift in venue from QUDOS Bank Arena to the far more intimate Big Top at Luna Park apparently also meant that all the sets had to be much shorter and locals Electric Mary had to be bumped, so it was Black Rebel Motorcycle Club who opened proceedings. Draped head to toe in black, guitarist Peter Hayes completing the ensemble with a full-face mask that only allowed his eyes to be seen, BMRC plunged straight into a swaggering, overdriven set with Red Eyes and Tears. As descendents of 80s noise rock, they were probably the outliers of the festival with their intimidating reverb-drenched dark rock and roll and it’s likely that most of the 1000 or so people who had arrived early weren’t that familiar with Beat the Devil’s Tattoo or Conscience Killer but it was strong set, curated from across their catalogue and driven by a killer live drum sound.

Stone Temple Pilots haven’t played in Sydney since the tragic Scott Weiland was still out front so it was unsurprising that most of the crowd had arrived by the time they came on, making the venue look more like a rock room and less like an empty car park. Core’s Wicked Garden served as an opening move, the crowd offering frontman Jeff Gutt a warm welcome as he strode out in front of a Sydney audience for the very first time. With less time to spend on deeper cuts than at other shows on the tour, STP stuck to the big guns. Gutt fills Weiland’s immense shoes admirably and his voice is spot on but he appears to lack an identity of his own which makes the band seem like a cover version of itself at times. Still, as hits like Down, Interstate Love Song, Plush and a glorious take on Dead & Bloated rolled out, STP looked every bit the superstars they had been when they walked as giants in the 1990s.

The revolving headline nature of this tour put Cheap Trick on next, and even before they came out there was an electric feeling that something special was about to happen. With a wave, they took the stage, Tom Peterssen looking dapper with his incredible 12-string bass, Robin Zander apparently ageless under his peaked cap, his son Robin Jr. looking very much a part of the band now. Stage right, under his stack of checkerboard amps, Rick Nielsen hurled handfuls of plectrums into the crowd as Hello There brought the room to life. After the darkness and brooding of the previous acts, Cheap Trick was an explosion of light and fun with their upbeat and energetic blend of rock and power pop. Dream Police got the entire room singing along, Nielsen raining down more plectrums in a huge cloud in between stooping over one of his array of guitars. With both Zanders adding solid rhythm and Peterssen’s amazing instrument working with Nielsen, Cheap Trick sounded massive on the guitar front but never lacked for that shimmering melody they are rightly famous for.

The hits kept coming – If You Want My Love soared, I Don’t Love Here Anymore sparkled. Nielsen’s antics were always engaging but he never steals the spotlight. Peterssen’s late set bass solo was brief and impressive, and Zander Jr. got to sing a track too. The sublime pop of I Want You to Want Me was followed by Surrender, one of power pop’s greats made even greater by BMRC’s Hayes joining them to add another layer of guitar as Zander wheeled around the stage. It was a spectacular and joyous performance by a wonderful live band, a show that went for almost an hour but seemed like it was over in ten minutes. Bush were up next, but my night was over – apologies to them, but unless Bon Scott-era AC/DC or Iron Maiden from 1986 was about to hit the stage, anything that followed was only going to be a disappointment.