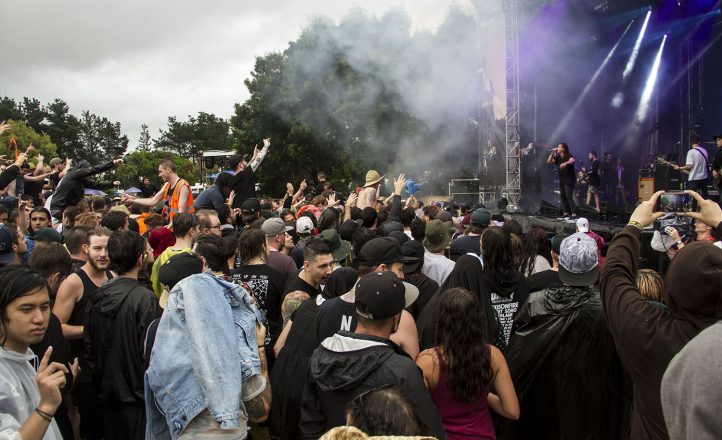 Polaris/Brendan Delavere
The long line of cars, the impending rain clouds, a quiet prayer that there wasn’t a line for entry, prayers answered when there wasn’t, and after a short trek looking like Simpson’s Donkey I was inside Unify.

But when the weather report in Victoria says 5mm expect 15 inches, because trying to set up a tent in the pouring rain is the absolute worst. After some swearing, my home from home was up, beers were cracked and a round of hellos to the neighbours began, one poor sod was already passed out in his tent, missing the entire first day of bands.

Despite the rain, the crowd had gathered for Columbus, who pumped out a massive set of pop hardcore jams for the dedicated few who braved the storm. Circle pits aplenty had the steam and the temperature rising.
Up next, the fast rising favourites Polaris kept the quick filling crowd running rampant despite the shitty weather. Circle pits, people on shoulders, hands raised to skies, the Sydney crew knew how to work a crowd, with vocalist Jamie Hails on the barrier from the get go. The soaking wet crowd didn’t let up.
Melbourne’s most destructive mother fuckers, King Parrot, are without a doubt the heaviest band on the bill this weekend, and they showed this with a force the likes of which I dare say this crowd hasn’t seen before. Unrelenting, sweaty and straight to your fucking face like a sledgehammer, Youngy and Co delivered a set of pub trash grindcore that’ll tear you a new one. ‘Shit On The Liver’. After that I might need to check my dacks.
A quick scout of the venue found that beers were cold and cheap, food was hot, plentiful and easy on the wallet, and everyone I ran into was keen to share a beer and chat.
Canada’s Counterparts followed soon after, with all the breakdowns in the right place and the correct amount of asking the audience to join in, the five piece had girls and guys alike running circles around the pit with tracks “Compass” and closer “Bird” garnering the biggest response.
Finally that incessant rain appeared to have run dry, the dust from previous years wouldn’t be an issue at all. Melbourne boys Ocean Grove were the band everyone was talking about, and they didn’t disappoint! Having seen them previously, I was not a fan, but with the good vibes, tight set and enormous amount of fun I witnessed, they have certainly won me over. The refrain of “Nice Gary!” after every song from the huge crowd that had gathered kept these vibes going great guns. This simple cry would soon come to be the call of the weekend.
As House Vs Hurricane took the stage, the sun broke through the clouds, warming the place as the crowd heated up. I took up a spot off to the side, dancing with some lasses who were more than happy to share some smuggled vodka with me. The recently reformed group smashed it out of the park, with “Get Wrecked” and “Haters Gonna Hate” garnering a massive response. People dressed as bananas, hotdogs and the bad guys from Mortal Kombat all took to shoulders, keeping security busy.
The in-between tracks from the DJ kept everyone’s feet moving and singing along to an impeccable soundtrack. The warmer weather meant the beers flowed freely as Melbourne’s The Getaway Plan brought back memories. “Streetlight” got the crowd going early. After ten years I still remember every word, and the ballad “Where the City Meets the Sea” had every person lending their voice.
As the sun set over the grounds of Unify, I made my way through tent city for a quick couple of beers with the neighbours, who happened to work at Mornington Brewery and had a healthy supply of free beers before racing back for California’s Letlive.
As soon as I hit that circle pit, I not only had to keep my eye out for a constant flow of bodies, but also a garbage bin. With frontman Jason Butler calling ‘some motherfucker better ride that bin’, seconds later one punter surfed it across the crowd wirh another riding inside it over the barrier like Houdini in a barrel. “Banshee”, “Muther” and closer “Good Mourning, America” ripped the shit out of Unify with Butler hanging from the rafters.
There was barely time for the crowd to grab a beer, some Dim Sims from the Men’s Shelter food tent and to join in a chorus of DJ Otzi’s ‘Hey Baby’ before Every Time I Die blasted onto the stage. “Glitches” and “We’reWolf” hit like a punch to the throat, which I copped from an enthusiastic pit ninja. “The New Black” took it to another level, with vocalist Keith Buckley practically calling for blood. With most tracks cut from Low Teens, ETID prove once more why they’re one of the most intense live bands around.
After running ragged to one of the tightest and explosive acts on the bill, I mustered all I could for headliners Northlane. As soon as the opening notes to “Dispossession” rang out the circle pit opened wide and all hell broke loose. “Obelisk”, “Rot” and “Worldeater” stepped it up, as the pit crushed, swayed and collapsed. “If someone falls down, pick ’em up” and as soon as I went down, someone had me back on my feet in seconds.
The debut of new track “Intuition” caused a mighty roar, with front man Marcus Bridge taking a second to recover before “Quantum Flux ” closed out day one of Unify.
As I made my way back through tent city, trying my best not to trip on ropes or throw up on my shoes, I finally collapsed into my tent, my somewhat wet tent (fucking rain) and passed out to the call and response of “Nice Gary!”.