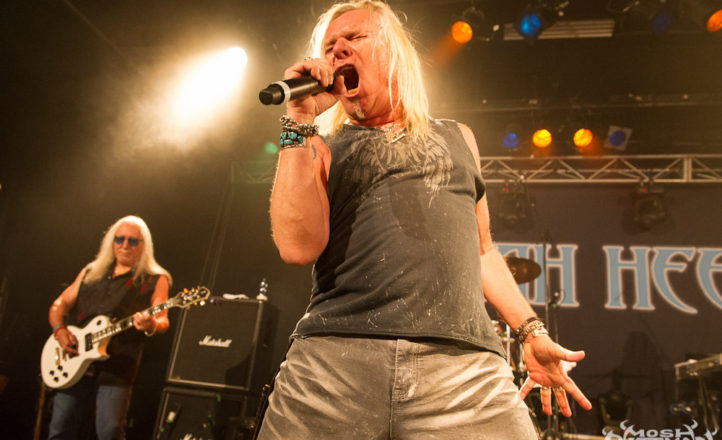 UK rock legends Uriah Heep currently cover nearly sixty countries in an 18 month touring cycle. At their vintage, that is quite remarkable. When last here, they played the Enmore Theatre but in this instance, the Metro Theatre suited things for an admittedly smaller yet no less enthused crowd. Their penchant for avoiding three minute songs led them to inadvertently be at the forefront of progressive rock but with their hard rock roots intact, they toured the world with some now hugely successful bands following behind on their coattails. Given their sound was also linked to bands such as Deep Purple, Black Sabbath and Led Zeppelin, to remain active shows that Uriah Heep has weathered the changes of the industry, at one point touring on an independent level before resuming recording and releasing new material to then tour again with label support. The band has endured and many fans present this evening seemed eager to celebrate the legacy of their archives.

Supports The Veil and Anubis were the chosen openers. The Veil gently opened their set with ‘When We Were Alive’ as keyboards and chiming guitars provided a backing for the almost baritone vocals before the song took on a heavier mood swing. The twin guitar five piece managed to push through with a pretty consistent set of tunes that had a doom vibe and plenty of spatial dynamics. Sometimes bordering on drone like repetition, tuning issues clearly didn’t help matters. Whilst a bit too bogged down into dirges for some in the crowd, their more recent material with the title track from Impermanence had a more up tempo vibe, very much borrowing from The Cure. To an extent Fields of the Nephilim, Sisters of Mercy and possibly even Bauhaus appeared to be the influences of choice for The Veil. Their song ‘Redemption’ featured dirty guitars and echo effected vocals that morph into a keyboard, drum and rhythm guitar figure, intentionally plodding emotively to the end.

Anubis were next on and set up a twig guitar and keyboard enhanced progressive metal approach that was more inclined to have guitar fretboard wizardry as opposed to long, moody artiness. The six piece had echoes of Pink Floyd soundscapes mixed with instrumental solos more akin to Dream Theater. Their musicianship was pretty impressive, particularly with the fiery guitar leads of Douglas Skene. But it was the more subdued melodicism of other guitarist Dean Bennison, with searing high end notes slowly catching the ear with thematic guitar leads that really gave the band some edge over the numerous other progressive metal bands due to a simple quality called taste. Not bad at all.

Support bands whisked off stage, the stage set was now clear with the no-frills Uriah Heep backdrop looming over the stage of keyboards and drums on adjacent risers and with guitar and bass rigs in the foreground of the stage, placing vocals in the middle. Lights dimmed and drummer Russell Gilbrook started off the show, commencing with drum rolls. The rest of band walked on as the only remaining original founding member of the band, guitarist Mick Box launched into the riffs of ‘Speed of Sound’ from the latest studio album titled Outsider. Tasty wah solos on his signature guitar were backed with the full sounding keyboards of Phil Lanzon as the drummer hit the kit hard, bringing an urgency and power to the material.

Their latest bassist Davey Rimmer who replaces the long serving, late Trevor Bolder, had an uncanny resemblance to Derek Smalls of the fictitious band Spinal Tap. This was an even more amusing link given the band’s history [keyboard player John Sinclair relayed anecdotes in the writing process of the film]. Jokes aside, the band took a more driving rock sound with ‘Hanging Tree’ from their late seventies album Firefly, leading into a nice little harmony styled guitar section. Mick’s habit of waving his picking hand over to the fretboard during longer sustained notes as if sprinkling magic dust on the fretboard or when using the wah pedal as accents added stage presence. The crowd seemed to find it mesmerising but it is part of his thing and that’s fine. Adding to the image of Mick in sunnies, sleeveless vest, flowing grey locks and cheeky grin; it was all part of the package.

Front man Bernie Shaw is still great at engaging the crowd, relaying innocuous touring anecdotes and referring to deep archive of the band’s back catalogue. Delving again into the latest studio album, the song ‘The Law’ had a great thumping rock groove as well as a vocal line of ‘ahs’ that tipped into falsetto vocals of old. Notes rang out of Mick’s guitar through the venue as he worked through an effective and loud stage rig that had two cabinets generating a great tone.  The way Uriah Heep covered their huge back catalogue against new material involved an almost chronologically but highly selective regressive approach, slowly creeping back to 1970. The audience demographic appeared fully appreciative and immersed in the ride without any sense of nostalgia overwhelming their new material which is honestly, equally strong.

After a quick quip about seated audience for the band’s prior night gig at the illustrious Rooty Hill RSL, they then set off into the classic ‘Sunrise’ from The Magician’s Birthday. The audience sang along in unison and to their credit, were generally more on tune or hit the pitch with the melody line than most audiences in various states of disrepair. The next song was ‘Stealin’’ from Sweet Freedom was a highlight of the main set, closely followed by the epic title track from Magician’s Birthday. Progressive rock, hard rock and even metal fans got right into the energy of the song as Mick underpinned the song with a strong, tightly played descending guitar rhythm and a substantial thump using enough space to ring out some open strings as the vocals soared. It soon segued into a substantial segment of musical endurance as Mick took to his guitar and wah pedal with musical prowess, accompanied by the drummer, peeling off fills galore.

Touching on their 2008 album Wake the Sleeper, ‘What Kind of God’ started with a slow bass intro adding a change of pace with some nice keyboard and guitar trade-offs. Returning to the Outsider album with ‘One Minute’, the band had made good on their stated intent to play about half the record at the show, giving good overview of their current sound. Starting with keyboards, the song soon moved into power rock rhythm that was solidly delivered with a good catchy chorus. Another new song with ‘Can’t Take That Away’ had Mick playing full, loud chords and wringing the guitar neck, reaching for feedback thus adding spice into another solid rocker.

Classics were back with ‘July Morning’ which eventually allowed Mick to jump into more soloing whilst drumming cymbals were thumped. The crowd lapped up the song with enthusiasm throughout the dynamics of the piece. Mick then briefly said hello, cracked a few remarks, thanked the crowd to then put aside his electric guitar briefly to dig out an acoustic for the crowd sing along favourite of ‘Lady in Black’. The thing is, whether playing through a Marshall cabinet or an acoustic, his character, style and definition in playing was clear through the PA. Full toned chords, arpeggios, little flourishes of improvisation and straight ahead song driving.

The venue was rowdy by the time of the encore by which point Mick Box did the band introductions and was soon trading riffs with the keyboards in ‘Gypsy’ from their debut album …Very ‘Eavy …Very ‘Umble. His guitar playing was also more visual than expected during the encore with expressions of potentially amorous thoughts towards his guitar. That being the odd gyration and thrust into the guitar on accentuating song sections. He got away with it at this point having already proved the band were in fine form. Ending the set, naturally, with the early classic ‘Easy Livin’’ from the highly regarded Demons and Wizards album, the temptation for using the guitar in machine gun like fashion with legs apart whilst pumping out the riffs proved too much. Older audience members reliving their youth where animated. It was also worth noting that the comparative absence of smart phones held aloft, which is today’s live performance curse. For some reason, these people seemed happy enough to simply get into the show and enjoy it. Respect your elders kids, they might be onto something.

Some veteran fans might consider that since Mick is the only original founding member then there is an element of watching a covers band with a star guitarist. The set missed chunks of their back catalogue, concentrating primarily on early seventies material and their latest album with a couple of other era tracks thrown in for good measure. However, given their recent material of the latest line-up is more than able to stand up to the legacy of a legendary songs indicates the criticisms are misguided. Simply, Uriah put on a thumping and no nonsense rock show that spanned generations, delivering great music. Sometimes, the old folks are the far better bands proving that music eventually wins out over all the hype that goes on and the band is still in fine form. Old songs were brought into the present day alongside some cranking new material in a fun, ninety minute set.