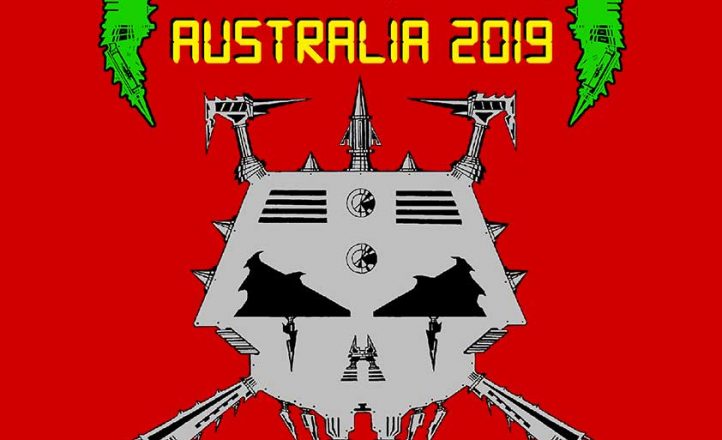 Good things come to those who wait right? Well tonight I have spoken to a couple of people who’ve waited half their lifetime to see headliners Voivod on their second ever tour of Australia.

Crowbar is a small pub in Fortitude Valley that has a great space under the street level that is fitting for a night of thrash and prog. Ably supported by two local bands, Asylum and Wartooth both of which thoroughly embrace traditional thrash sounds and attitudes.

First up is Asylum, who despite their sold 30 minute set sadly play to approximately 50 people. The band thrash their way through tracks from both of their self released EPS, and despite LOUD not having a big handle on the output, their energy makes them sound immense.

Wartooth follow up quickly and make their way onstage to AC/DC’s ‘Thunderstruck’ which is a great touch. The band start out rough with a bad sound and someone losing the timing once or twice. But after those early missteps Wartooth settles into their slot and plays a unique combination of traditional thrash mixed in with more early Skid Row vocal acrobatics, a combination that sounds close at times to longtime thrash titans Overkill. Very thrashtastic.

When it is time for Voivod to make their way to the small stage, there is no fanfare or lead in tape. The band are road dogs, despite the long absence from these shores, they came here with one purpose: to show us how they do their thing and why they have survived as a band for as long as they have. With a back catalogue to show off and a new album to support Voivod find a nice balance that covers most of their career and has the small crowd that is here to witness eating up every riff and lyric.

Obviously having a great time, vocalist Snake kept the energy going between songs with some great banter, and learning how to properly pronounce Brisbane from the crowd up the front. The biggest musical responses were reserved for the post-2000 material which is surprising given the average age here would be old enough to have listened to the band’s late 80s heyday.

The only real let down for LOUD had nothing to do with the bands, but was again attendance related. Here is a band that are well known in the metal underground, touring our fair land for only the second time in their 35+ year career and Brisbane struggled to get 200-250 people in a room with a capacity double that. This is why Brisbane has been taken off great tour routes before, and it will start happening again if live shows of all kinds are not supported.  We cannot profess to know the answer to why attendances are getting lower, because the bands that have been coming out are great, but there has been a noticeable trend in the last 18 months of small numbers at great gigs sadly.

But to sign off on a high note, the best moment of the night was a conversation we had with a fellow punter after the gig, a man in his early 60’s who spent the entire Voivod set directly in front of the band, regaled the story of how much this gig meant to him and how he never thought the band would get here after years of supporting them, and how for him, this was the gig of a lifetime. And that is the power of great music and a great live show.