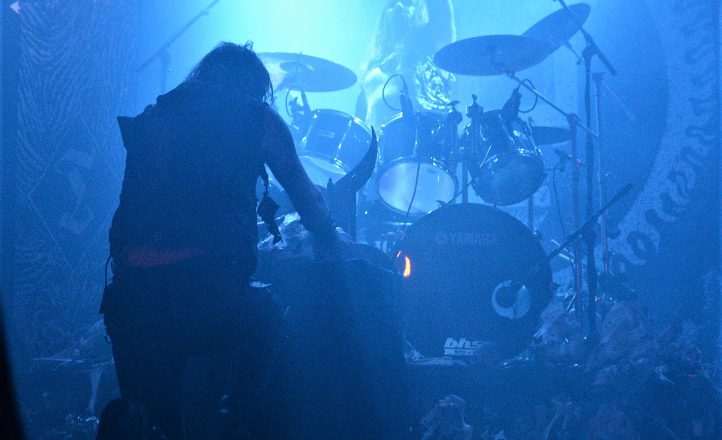 Opening the night were Sydney’s Sorathian Dawn. Present in various guises since the early 2000s, they offer cold, razor-sharp black metal, flitted with the progression of technical death metal (perhaps influenced by their affiliates in Ouroboros). Choosing to perform a mixture of tracks from their 2012-released self-titled album and this year’s ‘Sun of the Deep’ EP, their short performance engaged the gradually increasing crowd, keeping the stage banter to a minimum allowed the crowd to absorb the performance, ably aided by the well-balanced sound mix.

Nocturnal Graves promptly took the stage after a quick changeover. They kept stage banter to a minimum, instead proceeding to promptly tear the crowd a new one. With a lineup comprising veterans of hallowed Melbourne bands such as Denouncement Pyre and Deströyer 666, the band has perhaps reached their highest apex yet. Performing a cross-section of pieces from across their career, they made for a compelling, reckoning live force.  Skilful guitar interplay (between lead guitarists Decaylust and Shrapnel) and contrasting lead, and dual, vocals between Decaylust and bassist/vocalist J. ably recreated the venomous assaults featured on their recent material, and breathed new life into the early material they selected for their performance. From this reviewer’s perspective (against the barrier), the sound mix stayed consistent allowing everything to come through loud and clear.

After a brief intermission, the moment that the crowd had been waiting for had arrived. Banners and backdrops were unfurled, and torches, candles and tridents were lit: the mood had been set. Watain soon took to the stage, and launched into ‘Storm of the Antichrist’, leading into a ferocious set spanning cuts from most of Watain’s storied discography, skipping only 2000’s ‘Rabid Death’s Curse’. ‘Storm of the Antichrist’ easily set the tone for the night’s set. Alternating between expressions of utmost ferocity and displays of halting reverence, there is as much philosophy in Watain’s carefully cultivated live show as there is within their recorded output.

As Watain’s tour was to support their current release, 2018’s ‘Trident Wolf Eclipse’, the set was interspersed with cuts from that opus. Indeed, ‘Nuclear Alchemy’, ‘Furor Diabolicus’, ‘Sacred Damnation’, and ‘Towards the Sanctuary’ slotted in neatly alongside obvious crowd favourites such as the aforementioned ‘Storm of the Antichrist’, ‘Puzzles ov Flesh’, and ‘Sworn to the Dark’.

Owing perhaps to the highly focused nature of their live shows, each member of Watain were at the top of the game collectively and individually; every single moment seemed design to captivate the crowd, who were in turn rewarded with a command performance. Frontman E. made note that the Sydney audience seemed especially ‘silent’ on this, their ‘Sunday Mass’. Perhaps they were quiet compared to Melbourne and Brisbane on this whirlwind tour of Australia, but perhaps the crowd were merely transfixed in reverent awe at what revealed itself before them. One moment in particular that captivated the crowd saw E. calling to mind the ‘saints, forebears, and demons of the Sydney scene’. A rousing cover of Bathory’s immortal ‘The Return of Darkness and Evil’ was thusly dedicated to the members of Sadistik Exekution, before an intense ‘The Serpent’s Chalice’ from ‘Sworn to the Dark’ concluded proceedings. This was not yet the end. While Watain did not return to the stage, the rapturous applause did not cease until even after E had extinguished each of the candles that had been placed on their altar.

The concluding Sydney date of the ‘Southern Hell Siege’ tour proved that a black metal-centric lineup will still bring in the crowds, even on a Sunday night. The Factory too almost proved to be the perfect venue for such a night, one that saw each of these bands firing on all cylinders and taking no prisoners. It might have been Watain’s first headlining tour here, but if last night’s reaction was any indicator they’ll return to headline again sooner rather than later.