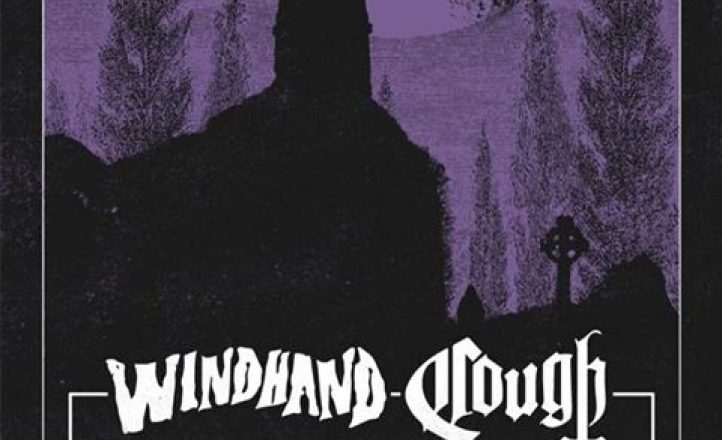 Newtown Social Club, Newtown NSWApril 5, 2017
Four solid sets of sludgy subculture attracted faithful followers of fuzz to the (soon to be defunct) Newtown Social Club on Wednesday the 5th of April. In front of a packed, humid room of millennial headbangers who grew increasingly more wild with each band, overseas headliners Windhand and Cough welcomed emerging homegrown acts Lord Sword and Dawn to their stage to kick off proceedings.

Leading the charge at 7:20 like the L7 of stoner doom, all female four-piece Dawn (5/10) wore their occult influences proudly on their sleeves to churn out thick, lumbering slabs of songs. Nailing attitude and vibe from an often too obvious osmosis of Windhand, Electric Wizard and Acid King CDs, Dawn mostly just played to stereotype of their countless other riff-heavy brethren, making way for the savage and tattooed Lord Sword (6.5/10),  who’d arrived ‘pre-mini golf’.

Unfortunately, sound equipment wasn’t on the band’s side. Singer Cory eventually resorted to cutting through the volume of the room with Eyehategod-esque screaming, in favour of singing like an angrier Glenn Danzig; mic and guitar cutting out in the meantime. Technical troubles aside, the angry quartet blazed on with macho stage presence and a set of grim tracks from their debut Tombstoned.

9:00 was time for Cough (8/10) and Windhand (8/10); the really heavy hitters from Richmond, Virginia. There must be something in the water in that town. After a moment of delirious anticipation, Cough’s first strains of feedback plunged the Newtown Social into a grisly, immense cacophony. Above the din of Ampeg, Orange and Marshall cabinets straining under the weight of ‘Ritual Abuse’, ‘A Year In Suffering’ and other soothing arrangements, the long-haired, wiry Parker Chandler released anguished screams from behind a wall of hair, hunched over his Rickenbacker bass. Cough were in full effect as Windhand drummer Ryan Wolfe filled kit duty, guitarist David Cisco provided semi-clean vocals as a respite to Chandler’s tortured growls, and axe-man Brandon Marcey dished up some maleveolent solos, completely ‘in the zone’. Cough’s new keyboardist, JK, projected a range of heady effects, digital noise and occasional drug/suicide related dialogue snippets above the filthy malestrom of sound. If one desired a peaceful, tinnitus-free sleep that night, this was a time for earplugs.

Between the ferocity of Cough’s last two songs, Chandler gave kudos to Dawn and Lord Sword, and thanked the crowd for coming out on a weeknight, “although it looks like [the Newtown Social Club] is on its way out.”

With Cough leaving the stage to rapturous applause, the stage was set for singer Dorthia Cottrell and company to bring the Windhand experience to Sydney. After guitarist Garrett Morris lit two smoking sticks of incense to compliment the autumnal European atmosphere of Windhand’s retro-fied doom, Cottrell strode onstage to oversee proceedings. Cough’s Parker Chandler stayed on bass as an official member of Windhand, having joined in 2013. The combined stage presence of these performers was an awesome thing to see. Playing a mix of material from 2009’s self-titled debut, 2013’s Soma, and 2015’s Grief’s Infernal Flower, produced by Jack Endino, Windhand’s performance transported the crowd to a strange place. With Morris strumming colossal chords on his axe in a trance-like state while Cottrell passionately delivered her ‘soaring vocals’ like a woman possessed, Windhand cast their spell on punters, crew, and musicians alike. Depending on how much one’s stomach could take of the relentless, snarling low-end. Against the scuzzy riffs and hazy aura, darker, warmer mood-lighting would have complimented the band to a tee. Despite cramped conditions, sticky floors and ringing ears, hard-edged reality was forcefully eroded by the all-consuming sonic cloud of these four bands. If only for four hours, the force and spectacle of these passionate performers and their cherished songs made for a powerful night of primal catharsis. Freedom and rapture from the unlikeliest music.