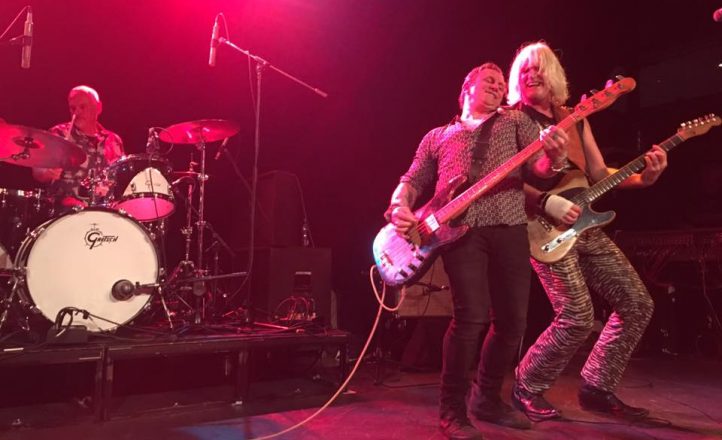 After almost getting entangled in a three-car collision on Dobroyd Parade on the way to the gig, I turned up to find the Factory resembling a vast, empty cavern as Kill Dirty Youth were ripping through a set heavily influenced by pre-Nevermind Nirvana. That’s not a bad thing by any stretch of the imagination, some raw sonic abrasion to get what could vaguely be called a crowd into the spirit.

There weren’t many more around either for Golden Fang and their easy-going pub rock full of local iconic references, songs about Clem’s Chicken and Doc Neeson and laconic between-song banter. By the time the next band hit the stage, however, the Factory was filling pretty nicely.

Leadfinger stepped up to play a tight set of blues-drenched hard rock, good meat-and-potatoes style rocking that’s pure as the virgin snow. Frontman Stewart Cunningham is possessed of a powerful voice and is backed by a killer band playing great songs with plentiful hooks and sweet melodies. An excellent band.

There was a pretty solid crowd for the headliners, and after 40 years X deserve it. Impossibly tall, frontman Steve Lucas towers above the crowd, a shock of white hair, bashing a helpless guitar. Kim Volkman throws oddly Ian Rilen-like shapes around the stage; Doug Falconer keeps it all together impressively behind the kit. They’re tight. They’re hot. They’re rocking. They’re X and they are ploughing through a mountainous set of ‘hits’, highlights and oversights that lasts for more than an hour.

Every track is a gem, the audience getting more and more energetic as they roll out: ‘Hate City’, ‘Dream Baby’, ‘Mother’, ‘Degenerate Boy’. The crowd roars in unison through ‘I Don’t Want to Go Out.’ There’s a surge of movement when ‘Suck Suck’ airs. A couple of times Lucas’ voice sounds like it’s going to break, but he gulps some water and rocks right on, keeping the chat upbeat but brief, pausing to remember fallen comrades now and then or remark on the origin of a song. The sound is crystal clear as Volkman prowls the room and he and Lucas play off each other. This version of X is a group of good mates having a whale of a time playing a bunch of timeless and killer songs in front of a room that was quickly becoming a love fest, love for a legendary act performing a glorious set of near perfection. When we interviewed Lucas recently he promised to be aiming for the “good” X and that’s most certainly what we got. There’s plenty of gas still left in the tank too.