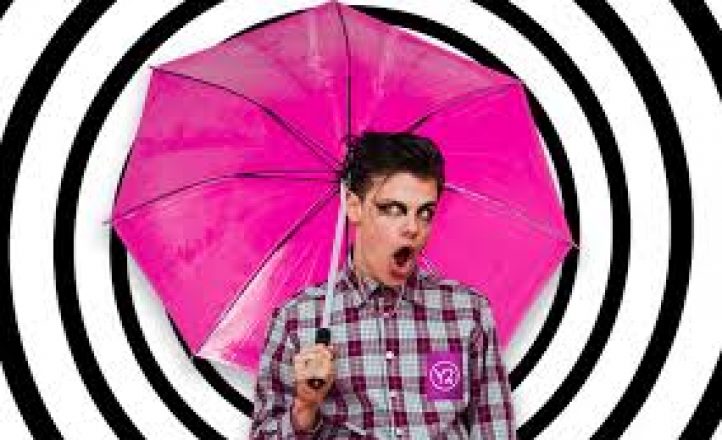 Black, pink and stripes adorned the patient punters waiting on this balmy Valentine’s Day evening, forming a long line of human liquorice allsorts snaking its way outside the venue and down Victoria Road. Roses, studs, fishnet tights and glitter were the accessories of choice. And smiles! Everyone seemed so damn stoked to be seeing England’s Dominic Harrison, aka Yungblud.

Before our hero hit the stage, emo pop singer AViVa, kicked things off accompanied by a drummer and a guitarist. Her vocals alternated from sweetness to snarls, her pretty movements mixed with possessed eye rolls and twitches. The overwhelming backing track was at times distracting, and the fact she desperately needs to bleach her roots. But there’s definite potential here (and impressive YouTube stats under her belt), and the crowd lapped her up – especially online hit ‘Grrrls’. It will be interesting to see what she does next.

Yungblud burst onto the stage with ’21st Century Liability’, the title track from his debut album. Met with rapturous applause and screams, he absorbed every ounce of the audience’s energy. Harrison doesn’t stop jumping, leaping, gyrating his hips, blowing kisses, sticking his tongue out, kicking. He gives so much from the first second; he’s a photographer’s dream.

Enhanced drums during ‘King Charles’ gave added punk rock power to the jam. A quick pash between Yungblud and guitarist Adam Warrington stirred up squeals from the pit. A rainbow flag was thrown on stage, and he proudly paraded around in it, cape-style.

Unreleased track ‘Icecream Man’ got the pit bouncing, Yungblud cutting loose with a tambourine. I look forward to this one’s release. More fan favourites followed – “I hope you’ve taken your pills. This song’s called medifuckingcation”, and 2019 jam, ‘Loner’, brought the entire venue to an acapella for a few choruses, accompanied by enthusiastic clapping to help keep the beat.

It’s hard to believe this English fireball is only 21; his show is so professional, he can pick up on the tiniest things, and he knows exactly what his fans want. The catchy yet thought provoking songs with an underlying punk/disco fusion keep the crow engaged and moving. We copped almost the entire Yungblud back catalogue tonight, and the punters at times almost drowned out young Dom with their word-perfect contributions.

The set came to a close with a guitar being thrown into the drumkit. Hungry for more, there was a sense something big was coming for the encore.

Then it came, as American pop star Halsey appeared for the live debut of her Yungblud collaboration, ‘11 Minutes’, the single released just that day. The screams were deafening. Their chemistry undeniable. If there weren’t rumours about the two of them being a couple already, there sure as hell are now. Halsey’s vocals complement Dom’s wonderfully, with a fantastic stage presence.

After she left, Yungblud continued to bring the goods, with closers ‘Die for the Hype’ and ‘Machine Gun’. Exhausted, sweaty, but happy, we then farewelled our poetic punk rock prince with the hope he returns soon.