Not really a defining musical statement 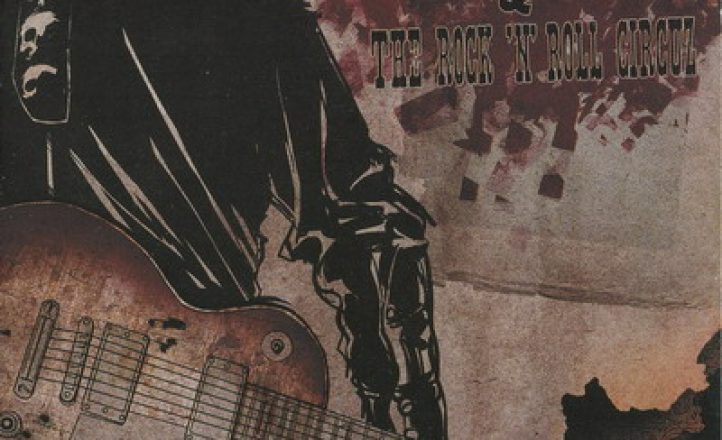 Sometimes you look at an album cover and assume the content, listen to it a few times and find your opinion hasn’t wavered.

That’s not to infer sub-standard material, just to explain that some may see it as a musical adventure, others might have the rock cliché alarm bells ringing. So here we have Mike Tramp, who used to be the lead singer in White Lion back in the days of pop-metal lite peaking in the late 80s. That was when MTV played pop and tried to pass it off as metal by only making the requisite costume changes. The guitar playing was good though, albeit very formulaic and slickly produced.

Thankfully, this album is not like that, but the problem is when it goes for raw rock delivery, it feels somewhat derivative. Little snippets of recognizable riffs pop up in sections but the benefit of the doubt allows that they may have been  subconscious. Or a tip of the hat perhaps, to some Bon-era AC/DC in sections of  ‘Gotta Get Away’ and ‘Got Me Crazy’. Perhaps the other band members snuck it in and no one noticed. Still, not many bands haven’t ripped of AC/DC and with good reason. The issue is that as soon as a song gets a swagger happening, it resolves to a chorus or something that just shifts momentum.

The first track ‘Don’t Let Them Put it on You’ sets the tone with basic rhythm guitar and drums, lyrics about beating the odds, some radio happy twang with the odd blues lick and a solid chorus. Tramp understands a hook and how to deliver a competent vocal line. It’s just that within the first three tracks, it feels like mining for radio-friendliness takes precedence over just playing a good song. That’s the problem throughout; corny lyrics that feel too contrived, a certain blandness and just no real grit. The reason it matters is the album cover has you believe it’s rawer than it is. He really can sing but the delivery is on too much of an even keel, which soon wears then as the dynamics do not vary a lot across the melody line.

Up to this point there are some moments where the band starts cooking but then they have to brake because of a forced bridge or chorus when they should have just gone with feel over structure. ‘Wish You Well’ and ‘The World is Changing’ are tracks well into the album that kept it afloat. The former uses deep reverb, tremolo guitar, widely strummed chords and builds some pace with bass and drums pushing it along. The latter has open chords against a decent riff which leads to a nice chorus with some subtler power chords followed by a not-too-bad solo. The lyrics felt contrived but that was tolerable compared to the trite, lyrical concoction served up in ‘Prettiest Girl’. We all love beautiful woman but a bit of intellect is preferable. The only saving grace is the succinctly timed guitar solo.

The second last track ‘Say What You Will’ has an earthier blues influenced pop feel to it but just sort of falls over after the chorus. This is because it starts to feel like a jam only driven by keyboard and drums whilst the guitar is all too brief. Bit of a wasted potential as it started out promisingly enough. Final tracks can be dicey if they don’t work. Sadly, ‘The Soldier Never Started a War’ misses the target. Complete with keyboards, acoustic guitar and typically patriotic and emotional lyrics, the intent was borne of genuine respect. However, the way these heartstring-tugging lyricssugar coat the reality of military service, a sense of an obligated response is invoked. Each to their own, but due to the repetitive nature of it, the concept came across as too simplistic for a complex topic. That said, the guitar solo with a wah pedal feel was quite deftly done. Overall, don’t expect the assault that System of a Down harness or anything like Dylan’s barbed insights on such a topic and you’ll probably be okay with it. It will either resonate with you or just pass by.

As a solo artist and as a member of a band unit, there is no doubt that Mike Tramp can play and write on various instruments, sing clearly, produce songs and arrange material. Some might think that amongst it lurks some sense of entitlement having been in a band that experienced massive success decades ago, but most doubt that these days. It’s not this that causes any shortcomings. The problem is that the material needs a spark to make it really work. Some of it is good, some not so good but overall this release is not really a defining musical statement. Competently done.