Short and to the point, 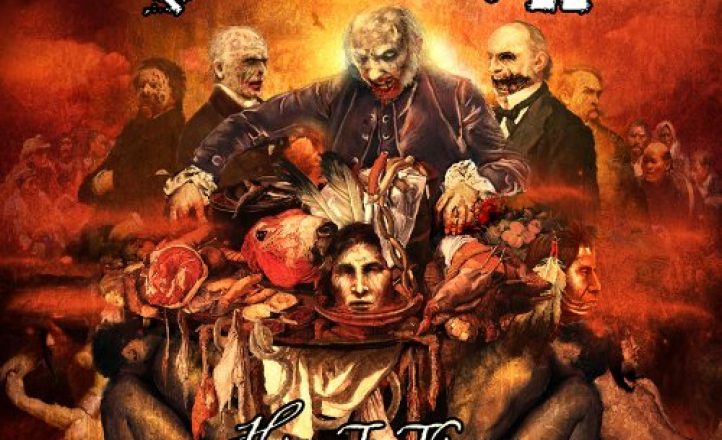 Having mixed both grindcore and death metal for the best part of a decade, Maryland’s Misery Index eclectic and ferocious sound has won them plaudits from all across the metal and hardcore world.

Heirs to Thievery, the band’s fourth album and third with legendary underground label Relapse, features an extremely raw and live sounding production and to be honest, a clean and polished mix wouldn’t have done any justice for the band. The machine gun double-kicks and crunching guitars show off a strong influence from both British grindcore legends Napalm Death and fellow Maryland brutal death metal act Dying Fetus.

The eleven songs that feature on this album are short and to the point, with countless numbers falling short of the three minute mark – but this isn’t Nasum, and there is plenty of structure and memorable guitar riffs to keep the songs from being one un-intelligible blast-fest from the next. Also, the band aren’t afraid to turn up the groove, such as the almost Pantera style outro of “The Spectator”.

Adam Jarvis’ furious drumming carries songs such as “Fed to the Wolves” and the blitzkrieg title track, with his playing almost breaking the speed of sound with the frenzied opening fills from “Sleeping Giant”. The guitar work is also top-notch, with the tag team of Sparky Voyles and Mark Kloeppel combining wrist-snapping picking and screaming solos with ease, while the band’s knack of writing killer riffs is also blindingly obvious, especially the frankly awe-inspiring bridge from “The Seventh Cavalry” and the crushing heaviness of “The Illuminaught”.

While Heirs to Thievery definitely isnit the most diverse record to be released this year, the sheer inhuman pace and frantic carnage that the songs possess will certainly keep fans of both grind and death frothing for more.

1. Embracing Extinction
2. Fed to the Wolves
3. The Carrion Call
4. Heirs to Thievery
5. The Spectator
6. The Illuminaught
7. The Seventh Cavalry
8. Plague of Objects
9. You Lose
10. Sleeping Giants
11. Day of the Dead