The last time The Sisters of Mercy recorded an album, guitarist and second-longest serving band member Ben Christo was only ten years old. Following that album, 1990’s Vision Thing, leader and mastermind Andrew Eldritch went on strike against the band’s record label and no recorded work has been forthcoming since.

While they are hardly the only band that formed in the 80s that continues to tour but doesn’t record, The Sisters of Mercy has continued to write new material. It puts them in a rather unique position as a working band, as any new songs they write can only be heard at a live show. Despite this, or because of it, he’s not quite sure which, Ben Christo has been seeing many new fans when out on tour.

“What I think it’s testament to is that we’re still playing and people are still showing up,” he says pleasantly. ”Particularly on the tour we just did, in the first few months of this year, we were playing in northern Europe and a lot of younger people are coming to the shows. I see people in the 18 to 25 bracket, and speaking to people, asking ‘How do you know about this band?’ – I think the strength of the legacy of the band is always attracting new people even though there’s no new releases, per se.”

Legacy is a word that can have many negative connotations for band that has been around as long as The Sisters of Mercy. But Christo is clear that falling back on that legacy is something they are not about at all.

“I think what’s nice about this band is that we haven’t done what a lot of other bands of our era have done, and that’s go out and do an entire tour of just one album, which is such a nostalgia thing to do,” he says. “It works for other bands, I just don’t think it works for this band. What’s exciting for me and Dylan [Smith], the other guitar player, is that we are the current members of this band, we are the current songwriters of half the set now, we have so many new works, and it’s so much more exciting for he and I to be writing songs with Andrew and playing them live than it would be to be playing songs from 1987! We like doing that too, but it’s really a balance of playing classic songs that have been recorded and newer songs you can only hear at shows.”

According to Christo, new songs now make up about 50% of TSOM’s live show. Because the only way to learn one of these is to find a live recording online or see them in concert numerous times, the guitarist admits to being a little anxious about the number of new songs the band is playing now.

“I was quite tentative, or nervous, that our set was becoming so new song heavy on this tour. Because it kind of goes against so much that you learn as a musician over the years – that you play songs that people know. I was feeling a bit self-conscious and sometimes I can be a bit of a chronic people-pleaser, so to think, ‘OK, we’re going to play another song people don’t know – how’s this going to work?’”

His fears were soon allayed.

“Because the new songs that we’ve written are so Sisters-y and I think they’re good, people are just watching and listening and enjoying something that sounds like Sisters of Mercy, but a version they’ve not heard before. So even though they don’t know the song, they’re familiar with the feeling that the song might have.”

Only being able to hear new songs in the live environment elevates TSOM’s fandom to a level of uniqueness that is rarely seen among other bands of their vintage, who are either still releasing records or cranking out voluminous re-issues or compilation albums. It means that to become a fan of new Sisters of Mercy music is to exist within an exclusive club where concert-going is not only required, it is necessary. Or, at least, it was until recently, when the quality of the average phone-shot concert footage on YouTube has improved.

“For fans to feel identified with the music,” Christo says, “is a key part of a fan’s very existence. They want to be a fan, they want to be the best fan, they want to increase their level of fandom. Having that exclusivity where they may have seen three gigs, so they sort of know the songs now is pretty cool. I have looked down and seen people knowing the words and singing along to these new songs. The words are on the website, and the nature of YouTube videos now is different than it was ten years ago,. You can now watch something and listen to something in pretty high fidelity.”

Younger fans too, Christo points out, are more likely to use platforms like YouTube to discover new songs by bands they like. Streaming is the way most people get their music now, after all.

“One fan was writing to me and said he had a playlist of all the new songs that he listens to all the time. He’s never been to see the band, he’s a young guy from the UK, but that’s how he consumes it. That’s an age group that’s a bit more acclimated to that way of consuming stuff.

Once we started this trend of putting up new songs,” Christo continues, “we were getting pretty high view counts quite quickly because people were realising that we were doing new songs. People were starting to consume new stuff via that platform.”

He puts the band’s popularity among younger crowds down to another factor, also, that Kate Bush recently discovered.

“[Younger] music lovers are a lot less fickle about what they listen to based on what they’re told to listen to. My generation there was only two or three magazines, two or three TV shows, radio stations, a few record stores… and that’s where you’d go to find out what was cool. Kids now will listen to something because they like it, not because they think the bass player’s hair is cool on the back cover of the record. And they’ll listen to stuff even if it’s not new, because it’s on a playlist that someone sent to them because [that person] thought it was cool. They don’t know when it’s from. They don’t think, ‘Well this is from 15 years ago so I don’t like it.’”

While long-serving guitarist Chris Catalyst left The Sisters of Mercy in 2019 partly due to frustration at the length of time it was taking to write material, the band does now have enough new songs to make another album viable. Eldritch’s beef with TSOM’s label that caused him to stop making records – he eventually fulfilled his contract by presenting them with albums from another project that were basically unreleasable – is long over, and there are a wealth of digital platforms that now allow bands to bring out new recordings without the need for label interference. But Christo points out there are other factors to consider.

“It’s certainly possible for us to do it. We have the means to do it. We have the personnel to do it. Whether or not we feel it would be a worthy use of the time and money involved in doing that,” he says, “is another question. There’s so many complications, admin and red tape that goes into doing that, and a lot of bands will create recordings so people will come to their shows. People already come to our shows. We’re in a very unique position whereby we’re able to do something very different than a typical band who will be like, ‘Right, we have to get this recording out so people will know who we are, and they will know our songs’. People are coming to our shows to hear our new songs, because there’s no other way of doing that. With the recording question, I can only say that there’s no plans to do it, and there’s no plans not to do it.”

Cost, of course, is a relevant concern. With digital streaming services strangling remuneration for all but those musical artists in the top tier of earners, a cult act like The Sisters of Mercy would be unlikely to make back the money they would spend on the recording.

“Yes, what’s in it for the band?” Christo asks, rhetorically. “Also, the recording is just one side of it. There’s promotion, artwork, and other people start getting involved and you have to start diluting your ideas and compromise, then things get held up because you’re waiting for this person to return emails because they’re the only person who can do it, and then they leave and the person who replaces them doesn’t want to do it the same… it can be very anxiety-inducing and frustrating, the whole process of doing that. We’re in the great position of having the fun of writing stuff, and then play it live and see how people are enjoying it.”

That’s really exciting about this set list of 11 or 12 new songs that we’ve been circulating,” he continues, “I don’t think there’s been this many songs by the [same version] of Sisters of Mercy being played at the same time, so there’s a cohesiveness in the sound of the material and we feel as if we are a band because we’re the same people who’ve written the songs together.”

The current version of The Sisters of Mercy is the same one that toured Australia in 2019. Not long after that tour, live music began to be shut down everywhere due to the COVID pandemic (“I got it before it was commercial, and mainstream,” Christo jokes about his own bout of the virus in early 2020). While other musical artists worked on albums or other forms of release, The Sisters of Mercy is a band that exists as an exclusively live entity. For them, the shutdown was particularly hard. When they were finally able to tour again from the beginning of 2022, the band felt a real sense of gratitude and relief.

“We tried to remember that on that last tour because it was one of the longest we’ve done,” Christo says. “Yes, we’re sitting around in a dressing room and we’re bored, but isn’t it great that we’re here? And as the tour went on we saw that COVID was disappearing slowly so that by the end of the tour we had to remind ourselves that it was even a thing. Which was great, because at the start there was all these restrictions about flights and there was forms and tests and things to a point where I thought we weren’t even going to get to rehearse. By the end there was really big crowds, people weren’t afraid to come out, and we were meeting people. It was really, really good.”

The Sisters of Mercy are touring Australia in October/November. 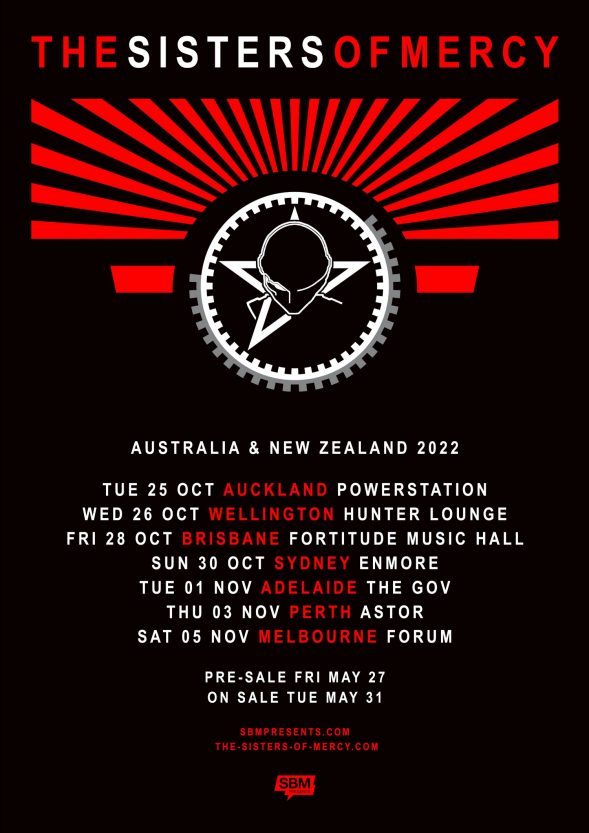