“I’ve always seen metal as being a proper community and even a little bit of a family.” 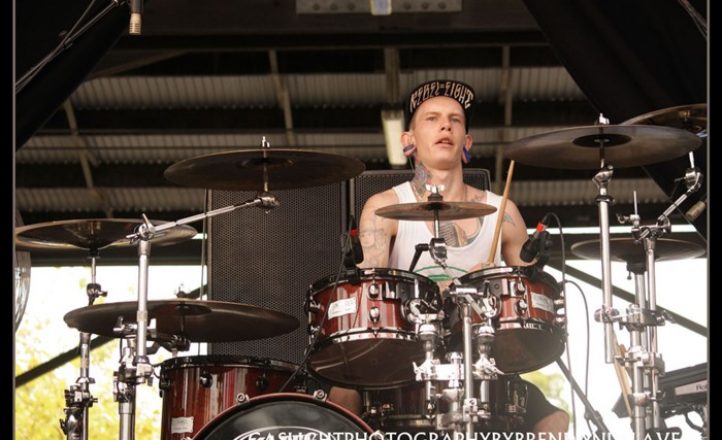 Australian deathcore bands might be plentiful but it’s a safe bet that most have not racked up the list of achievements earned by Sydney-based act Thy Art Is Murder. Appearing on the Soundwave 2014 tour alongside a star-studded line-up, they have already toured internationally and locally multiple times after their second album, Hate, cracked the ARIA Top 40 upon release. Better yet, it is notable that by two albums into their career Thy Art is Murder was signed to the celebrated metal label Nuclear Blast. They also traveled to the States to participate in the Summer Slaughter tour. As the Soundwave touring onslaught approaches, Loud snared some chat time with drummer Lee Stanton about their homicidal musical artistry.

How was touring with both Fear Factory and Cattle Decapitation?

Pretty wild. Obviously Fear Factory was a band I looked up to when I started playing drums and stuff. So, getting to play some shows and hang out with them was pretty cool. Cattle are just bullshit good and they are all legends as well so it was cool to hang out and stand there watching them shred everything.

For your drum kit you’ve got a double bass pedal using a using a single bass drum. So for you, did you learn things watching guys using triggers and double kicks?

It is good being able to watch them up close because there were things that helped improve on my personal playing style. Even being able to sit down with them and be a nerd to swap techniques and all that kind of stuff was good. It gives you the opportunity to better yourself as a musician when you get home.

How much time did it take you to perfect your wrist movement for your snare attack in the death metal style of playing?

It just came over time from being able to play constantly. When I got home I would really sit down and nail everything between tours. I try to put in a couple of hours a day for either learning new things or solidifying what I have learnt.

Given you’ve got a distribution deal with Nuclear Blast, do you now push yourself further by comparing your drumming to the international artists in extreme metal?

I don’t know, I don’t see myself as being a great drummer. Obviously there are a lot of things that I have to learn but it is pretty cool to now be able to sit down with a lot of those drummers and sort of pick their brains.

Can you talk about how much going overseas for producing your album had a similar benefit by being around people at that level in the industry?

Yeah well, the Summer Slaughter tour was awesome with guys like Matt Halpern [Periphery], Matt Gartska [Animals As Leaders], Billy Rymer [The Dillinger Escape Plan] and obviously Dave McGraw [Cattle Decapitation] on the bill as well. It was great to be able to watch and chat with those dudes and have someone like that suggest to say turn your hand over a little bit in these parts or ways to learn things.

What have you learnt about both performance and maintaining equipment for touring just by being on the road with those bands?

I’d say just general maintenance as I never used to be too big on it. Obviously once we got promoted we were around much more professional drummers so you pick on everything pretty quickly. You sort of just watch and learn so now I try to keep my kit in tune constantly and make sure all of my cymbals are polished. It’s god now because it benefits you in the long run.

Drumming in metal has changed so much as a lot of the recorded drums are almost too well gated and seem perfectly executed. You have to see a band live to see if they are the real thing or not.

Yeah, I’ll hear some things and think, ‘wow, that’s pretty sick’ but if you then see them live and that guy pulls it off live then you think, ‘they absolutely fucking rule’. But it is always different in the studio as well. There is a difference between the guy that can nail it in the studio and the dude that can sit there and get everything programmed. If they can do it live then I’ve got not dramas with it.

What did you pick up from recording overseas [The Machine Shop Studios in New York City] that you might not have gotten locally?

Really, just being able to sit down with Will [Putney – engineer, mastering, mixer and producer] and having an outside ear on things. Plus he was able to throw ideas at me. He pushed me really hard as well which helped me improve my playing.

Regional local bands such as Deprivation might have to travel long distances to play shows in cities. You can relate to that hailing from Blacktown. So, would you agree that the local metal scene is a supportive community?

Yeah, I’ve always seen metal as being a proper community and even a little bit of a family. So there’s not that much politics going on as well and everyone is usually willing to help or look after each other so it is good in that sense.

How do you see the Australian metal scene surviving when there are so many international tours and there is still this odd sort of cultural cringe going on?

You’ve appearing at Soundwave in 2014. There are so many bands on the bill so have you been given any hints to when you’re playing? The logistics must be brutal.

We haven’t been told times and stages yet but I am guessing we’ll be a bit earlier on in the day. People can complain about one or two bands on the line up but they should just go and watch the other eighty bands on the bill. We’re stoked to play on it.

How did you cope with a one out of ten CD review from Decibel Magazine? I guess it means that everyone will read it. All publicity is good publicity, in a way.

Yeah, I don’t really take any of that stuff to heart and you know, everyone’s got their own opinions. Some things float people’s boat and some things do not. That’s true though in that between good publicity and bad publicity, maybe bad publicity can be better.

For how long have you been playing drums and how would you say your technique or style of playing has changed over time?

I’ve been playing drums for eight years. I’ve probably only really started to get my playing to be solid over the last two or three years. I had to pull my finger out of my ass a bit. I’ve still got a fuckton of things to learn but just being on tour with a better calibre of musicians helps your playing and learning happens more quickly.

With so much going on at the drum kit in most songs, how does the band keep in time with you and do you have certain cues with each other to stay tight?

Well I play to a click track so I’m fine. They have just got to play in time with me. It is alight in that sense and in saying that, if everyone sits at home, playing along with a CD, that is pretty much practicing. Well, that is the case with me, anyway.

What is the songwriting process in the band? Does anyone have veto on final songs?

The usual thing, really. Sean [Delander – bass] and Marshy [Andy Marsh – guitar] will sit down and riff for a while and fire ideas about. They’ll then throw ideas to me so we just sort of go back and forth with drums parts and arrangements. We run it with a majority decision for songs. If someone loses out they’ve just got to sort of get over it. In the same sense, when we sat down with Will, he would break down all the songs into parts to decide what works and flows or not. Sean has written a lot of the stuff over the years so he is kind of the main driver behind it.

Did you find the club scene in America much different to Australian ones? What were the hurdles you had to contend with for touring there and playing those venues?

The main big thing was that we had a lot of van trouble over there. The roads there are a bit more treacherous and you’ve got heaps of driving to do. If you do an East Coast tour here you’ll maybe have up to five big drives. Over there it ranges to anything up to a twelve hour drive between shows. If you have to do a couple of those at night and deal with the roads not being that great either, it just takes it toll on everything. You get tyre trouble, trailer issues, blowouts and spare tyre problems in general.

Did you play somewhere like LA where they are a ridiculous number of bands churning through various club doors? Which show had the biggest impact for the band?

Yeah, we pretty much did a big lap around [the States] while we were there. For the first show I’d say the reaction was pretty wild. We’d been over before with a tour we’d done but that was only twenty minutes on [stage time]. This one was for the Summer Slaughter tour and the album hadn’t been out for that long. The first show we turned up to had about 360 people there so that was a nice surprise. That was pretty consistent throughout the whole tour as well so we were pretty fucking stoked on that.

Did you prefer that sort of tour to say supports for bigger venues with Parkway Drive?

Both types of shows are fun. Smaller shows are always more intimate and feels more personable with the crowd because there is no barrier. It makes them feel like they are a part of the show as well. The big shows are just fun because everyone has a lot more room to spread out and playing to a bigger crowd is always more fun.

After Soundwave, what is on the agenda for Thy Art Is Murder?

We go straight to the States to do an Emmure tour and then we have another couple of tours lined up that haven’t been announced, soon after that. So we’re pretty much just going to keep gigging. We’re looking at doing some European summer festivals if they’re on and we hoping to have time around that and jump on a few of those ones.