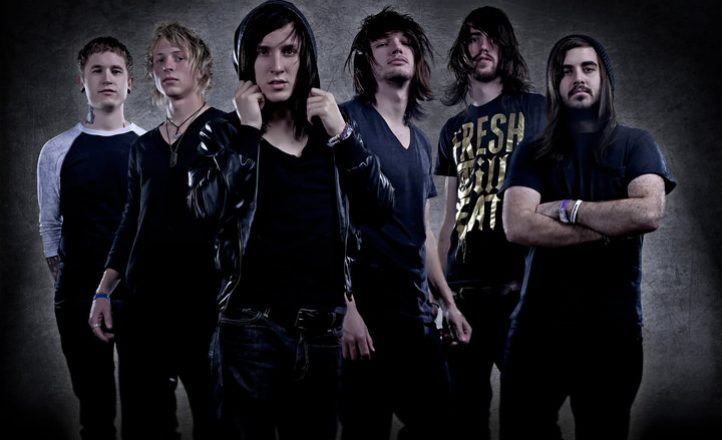 Arizona sextet The Word Alive are one of the bright new things among the metalcore crowd. Having only formed less than three years ago, they’ve already hit the Billboard Top 100 with the success of their debut album Deceiver, released in August last year. On track to tour Australia in September with Every Time I Die and The Acacia Strain, Loud spoke to vocalist Tyler Smith.

Q: Tyler, The Word Alive is coming down to Australia; will this be the first time you’ve graced our shores?
A: Yes it will; I’m very excited to get over there.

Q: What are you most looking forward to about coming to Australia for the first time; I’ve heard a lot of artists say that Australia is one of their favourite places to visit?
A: I’ve always been told that as well so I’m excited to be able to say that for myself, you know? I think it’s a mixture of hearing that it’s the best place and hearing that it’s some of the best shows. All that combined is making me really excited to get there. Just on top of hearing that it’s a beautiful country and that your sushi is very good, which is a high priority of mine to check out.

Q: Do you hope that touring with Every Time I Die will extend your fan base and open up THE WORD ALIVE for future shows in Australia?
A: Oh of course. The band told our booking agent that any offers we get from Australia, we will take. We wanna come over as much as we can, within reason obviously, just because we’ve had so many fans write us telling us they want us to come, because we’ve seen and heard so much whether it be YouTube videos about bands like Parkway Drive, or from hearing from the fans about how crazy the shows are. It’s definitely one of those places in the world that we’ve been anticipating playing the most.

Q: You said that following Australia you’ll hit Europe for Never Say Die. Have you guys been there before?
A: Yes. We actually went earlier this year with We Came as Romans, Miss May I and This or the Apocalypse. So we had a great time and we’re gonna be headed back in October and then probably once or twice a year as long as we’re doing this.

Q: Following all this touring will you start writing new material or do you constantly write?
A: We constantly write. We have a few song ideas written out and then we have two songs pretty much done. We have a mobile studio set up on our bus so we record all the time. Once I get back on the bus; we just stopped to get some food, the noise will continue and we’ll probably do some more writing.

Q: So will we see any new stuff at the Aussie shows?
A: We’re gonna play a new song. We just put out a re-release CD that had two brand new songs so we’re playing one of those for Soundwave; it’s called “Apologician.” But we probably won’t have the new-new material show-ready by then, just because we’ve been touring so much that when we’re home we like to take a break. I live in California, the band are from Arizona, Justin (Salinas) our drummer, lives in Oregon. So we like to have our breaks when we’re at home and we prefer writing when we’re on tour.

Q: You guys have only been around for a few years, but in that short amount of time you’ve already experience a few line-up changes. And it seems to be happening more these days; what do you think are contributing factors to this?
A: I think it’s multiple things. I think for some bands it could be something as weird as social networking? I think band dramas and things are much more in the public eye; I feel like a lot of people are under scrutiny and that can get to them. They have pressure from labels and management to be more involved; to do this and do that, to be this and be that. And I think the pressures are different to how they used to be where I think the consensus was, “Write the best music you can write,” and “play good shows.” And now it’s, “How many followers do you have, friends on MySpace, likes on Facebook, how many plays did you get today?” Music isn’t making the same amount of money that it used to be. I don’t know how it is in Australia, but in the States people just aren’t buying CDs like they used to which hurts bands in multiple ways. CDs aren’t what musicians rely on for income, but that’s how more and more people discover the band, that’s how other labels and other people see that a band is on the rise so they can present opportunities to them. I think in general, people are join bands because they think it’s cool and then they get out on the road and realise, “Wow, this is really hard,” and that it’s just not for them. There’s a ton of competition now, especially in our genre, and if you take a couple of missteps in your band’s direction, you could easily just fade away. Often you’re forced after years and years of being in a band to fade away and you’re like, “Wow, I’m almost 30 years old and I’ve been in a band and I don’t have a college degree and nothing else going for me.” I think the reality is that a lot of people are trying to get famous and not really focus on the music and the dedication it takes and the fan base you need to have to thrive and have a successful career. Our band, we try and focus on those things and keep them in mind. We’ve had three total member changes. One was because of family issues, and the other two were our decision. Our previous vocalist when the band started, right after he had joined the band recorded some demos, Craig (Abbott) joined Escape the Fate and was pretty much gone full-time. So the guys had quit jobs and school and put themselves in a position to dedicate their lives to their music and they got a brick wall thrown in front of them. So they made a decision that they wanted to tour full-time and they replaced the guitarist with myself, and Craig sounded great with Escape the Fate. I’ve had the time of my life living in this band, and we had another change where just writing styles and the direction of the band; we had a clash with our past drummer of the band and personality conflicts. There were five of us in the band that are trying to be best friends and be in a band, and there was one person who wasn’t really buying into that. I think that’s another thing as well; if you’re not really close with your band, if you don’t prioritise your friendship above the songs you’re writing and the tours that you’re doing, things can fall apart pretty quickly. Not to talk badly about him necessarily but that was kind of like the bad seed in the group so we decided to make a change there.

Q: One of the things I love about you guys is the synthesiser! I’ve noticed that a lot of new bands coming out are incorporating good old synth back into their music. Do you think it’s adding a new dimension to the stuff you guys write and that that extra instrument gives you guys a bit of extra appeal?
A: I think it does because we actually have a keyboard player who can play as opposed to someone who just presses a couple of chords on there. It’s not necessarily a waste of space but I just feel like sometimes, there are some things that technology’s put in place like backing tracks to do that; there’s no reason to have someone that’s faking playing up there. Our band takes pride in the fact that we can all play our instruments, so for us; it’s awesome having a keyboard player. We love it. It adds a lot to our band. Dusty (Riach) is definitely the best in our genre at what he does, so when we have that aspect going into our writing and music, it’s something that other bands might not be able to have, because he can actually play what we’re writing and take it to a level that a lot people might have to program into a computer and software to accomplish.

Q: I follow your Twitter feed, and you’ve got a pretty active relationship with not only your fans but also your fellow musicians. Do you think the distance between fans and the bands they support is being drawn closer together than ever before, and how is this an advantage or disadvantage to not only The Word Alive but to all musicians?
A: I think that social networking in that aspect has definitely brought together bands. You find out you’re going to be touring with a band; you used to meet the band when you got on tour. Now, it’s like at a point where you can kind of even become decent friends with people you haven’t met, but you know you’re going to and you share a lot of interests and you’re going to be going on tour. And ultimately these are the only people who only truly understand what we’re doing to the extent that perhaps we’d like everyone else to. These are the guys who are on tour eight to ten months a year. They’re riding around in vans at the beginning of their careers and they’ve been working hard, and they have that connection and that bond. And then kids see that it’s okay to like multiple bands and that a lot of us are all friends and that it’s not a competition. We all love what we’re doing so I think it’s great having that capability nowadays.

Q: When you guys get to Australia for, I’m sure you guys will make a great many new fans from your live performances alone, which are very high in energy and intense. For the Aussies who haven’t seen you or heard your music before, what can you promise to the people that come along to see you?
A: I can definitely say that we’re a band who don’t party much or mess up a lot. We practice as much as we can because we feel that our fans deserve the best that we can give to them that particular day. We’re gonna be one of those bands that you hear the CD and you come see us live and you’re not gonna say, “Oh, that’s nothing like I thought it would be.” You’re gonna say, “Wow, this is a band who actually sounds really solid live,” and I think within our genre there’s a lot of bands that don’t really care about that as much because of the raw energy and because it is so much fun to display the energy live. But I think we have the perfect blend of going as crazy as we can go and play as great as we can play.